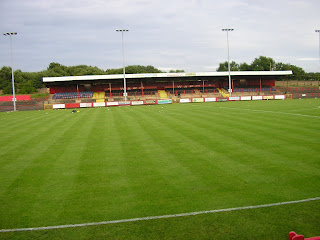 Ah.....Workington..... it`s not the place that immediately springs to mind when thinking of where to go!
County`s last visit was back in 1977, the season that Workington(then Town) took their leave of the Football League, but I wasn`t there and cannot report on the experience. Go back almost 2000 years and the Romans were in the vicinity. I wasn`t there for that fixture either, but can report that they built a fort, to keep the Scoti out, and promptly left when the chill Cumbrian air got too much for them. Then there was James I ( circa 1603) who built a dungeon and had as many as 100 poor souls at a time imprisoned therein in a space of no more than 5 square metres. Unsurprisingly there is no documentation in existence to tell us just what the eventual fate was of the many hundreds so confined. We just do not know what happened to them!
Much the same might be said of County in the first half last night as they struggled to make an impression in a game in which they were  a touch fortunate to go in only one down at the break.
Workington had been first to the ball more often than not, and used it decidedly better upon getting possession. Their set pieces were particularly good, one such bringing them their goal, and County looked in for a drubbing in the second half to me, despite having the wind in their favour! It did not quite shape up like that fortunately, and after an opportune goal from Iain Howard had levelled the scores, County grew in confidence fully justifying the point in the end which was accompanied by a warm ovation from the large County following in the crowd of 563.
Top men for County? Well.... there were one or two this time thankfully-first 45 minutes notwithstanding- the whole back line looked better equipped to keep us afloat last night with the pairing of Charnock and my M.O.M Fagbola growing in confidence as the game progressed, with  Jacobs and O`Halloran likewise on the flanks. I was surprised when Howard was substituted, and so was he, but his replacement Adriano Moke was a revelation with his pacy skilful runs. Workington couldn`t get near him except to foul him! But that first half was not great and we need to do better in this respect with the likes of Hand, who had a poor game, Craney , Verma and Jevons needing to do better than most. Ormson meanwhile did but still had his moments of indecision and King must be champing at the proverbial bit on the sidelines! 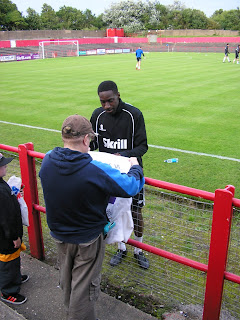 Adriano Moke obliges with a signature! 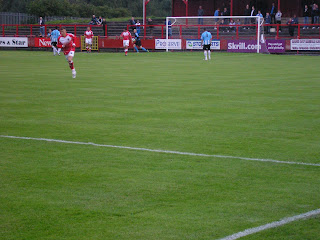