Showing posts from August, 2017
Show All

AFC Telford United New Bucks Head Stadium Watling Street Wellington Telford TF1 2TU The stadium can hold 6300 supporters, with seating for 2200 and further covered accommodation for 2600. Tickets & Admission AFC Telford United operate the following admission price policy for league games. Adult £14 Concession £10 Youth (16-19) £5 Under 16 £3 When segregation is in operation, away fans are housed in the Frank Nagington (South) Stand, providing covered terraced accommodation for 1200. Seating is usually available for away fans in block A of the West Stand on request. You can purchase tickets in advance for a game. You can call 01952 640064 for further information. Directions The New Bucks Head is situated to the northwest of Telford in the Wellington area, and is easily accessible by road and rail. The stadium is well signposted from Junction 6 of the M54 (Wellington/Telford West). The nearest railway station is Wel
Post a Comment
Read more 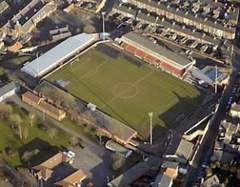 County flattered to deceive at the Lamb today, taking an early lead through   Sam Minihan, before   surrendering   same seven minutes later, and then the game in a second half best forgotten.  Minihan, good goal ( Andrew Machin ) Despite County’s early dominance, and the shock of seeing the lead slip away, 1-1 at half time, with County playing towards their vocal support    , looked to maybe be a reasonable platform from which to sneak 3 points in the second half, but it was not to be.    Seated County Fans Andrew Machins pic of the Away Terrace. Ostensively this was down to Reece Styche who capped an all action second half display with 2 goals, but County’s inability to impose their game on their hosts was also a cogent factor in my view. Styche- all action performance ! One of the Styche strikes came via the penalty spot, but by that time, although we were building up some momentum, there was always room for Tamworth to belie
Post a Comment
Read more
More posts