Showing posts from July, 2013
Show All

By Unknown - July 31, 2013
Stockport County offered their hard pressed supporters evidence that things, on the field at least, are progressing in the right direction as we get closer to the Club`s first taste of life in Conference North, by   disposing of the challenge from FC United of Manchester 2-0 at Edgeley Park last night. County`s opponents presented credible opposition, on paper anyway, and in the first half, to some extent, on the park as well, where they opened in lively fashion and pressed with regularity. They needed something to go with the neat play though, and in the box it was missing, thus County merely waited their moment to pounce, and having got to the break level at 0-0-it duly arrived as 2 goals in a 6 minute spell, from Tunnicliffe and Dennis put the game out of the Manchester club`s reach. The result hinged on the changes made at half time. FCUM made them wholesale whilst County restricted theirs to 3 and mightily effective they were too, as Howard and Craney totally ran the show
1 comment
Read more

Walking to the Match 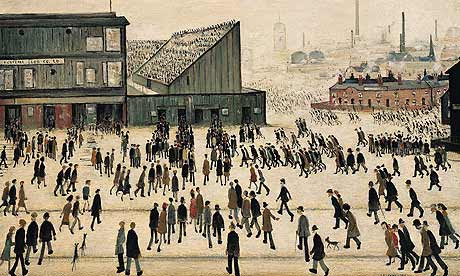 The town was rife with rumours in the lead up to County`s latest pre season friendly against Scottish Premier League side St Mirren. Yes.............the Scots were coming, and speculation abounded as to whether 300 or 400 of the fearsome visitors would make the trip. Way back in 1745, much the same issues abounded as the Town awaited the arrival of Bonnie Prince Charlie as he made his way towards London. The locals must have been anxious, but in the end action by the English military ( who destroyed Lancashire Bridge) delayed the would be monarch`s forward push just long enough to ensure its ultimate demise.   The latest invasion proved altogether more benign as, something in the region of the previously anticipated 300 to 400, took up position behind the goal at the Railway End, bravely eschewing any headgear, by and large, in fairly fierce sunshine. The game proved to be an excellent work out for County who will think themselves a tad unlucky to concede the game`s only
2 comments
Read more

Stockport County – why support them and not the other two?

By Adrian Caville - July 26, 2013
Given that arguably the most famous football club in the world is around 7 miles due West of Stockport and currently the planets richest funded club a similar distance to the north west, the independent arbiter may well scratch his or head wondering why some of the inhabitants of Stockport and its surrounding area would bother to support a perennially underachieving lower league (I wish) none league football team. A team that has never played at the highest level and is the antithesis of its plutocrat American owned cousins at Old Trafford and at the flag ship airline of Abu Dhabi stadium. Well a good starting point would be is that I actually reside in Stockport . I know that in this day and age of franchise and global economics that is less relevant then it was perhaps even 25 years ago. Stockport is hardly the prettiest or most endearing town in the universe but for me aside from the first three and half years of my life it has been home. Just to then blow that argument out of th
2 comments
Read more 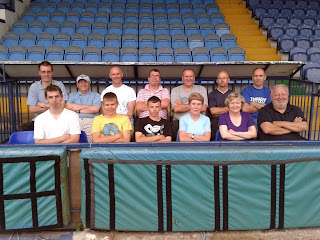 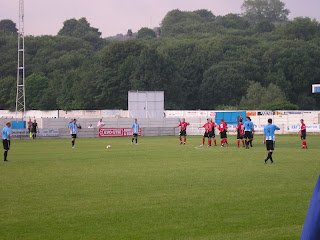 Phil Jevons tees up the equaliser!                                                   ( pic by John Gaskin) County`s` encounter with Ramsbottom United at the nicely appointed Harry Williams Riverside Stadium last night, turned out to be a bit of a cracker, with the blues on the back foot for long periods of the game ,but surviving in good enough nick to snatch the game with a late winner from Kristian Dennis. For 60 odd minutes the game was a constant nightmare for County who looked in for a thrashing , with Tom Brooks and Ian Flannery making the usually excellent Kyle Jacobs wish he was elsewhere , and Dominic Smalley aided by Danny Warrender doing a similar job on Stephen O`Halloran on the other flank. Well ...that`s the way it looked anyway with United`s neat play paying off with 2 goals in the first half and another just beyond the hour as they cruised into a seemingly unassailable 3 goal lead. Ian Bogie must have been thorough
Post a Comment
Read more

What type of County fan are you?

By Graham Privett - July 22, 2013
In my view, the lower down the football pyramid County fall, the bigger influence we supporters can have, particularly in respect of what happens on the pitch. I think we are even in a position to influence results. Some are speaking openly of every game effectively being a home fixture, i.e. County supporters outnumbering their counterparts at every match. I have a theory that fans of a football club can be categorised, pigeon-holed if you like. Have a look at these definitions. Which currently fits you? Sympathiser You have a soft spot for County but they are not your first team. The only way that you will turn up is if your "proper" team aren't playing, you've got nothing better to do, and someone else pays. The things that you say include "I always look out for County's results". There is another type of sympathiser, one whose life and very well being are affected by County. Usually "hitched" to an Obsessive (see below), th
1 comment
Read more 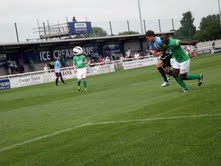 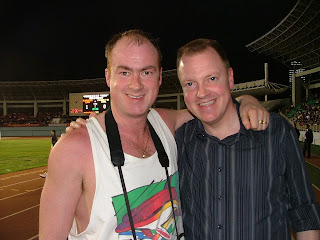 Steve Bellis ( right) and brother Martin,                                                 on tour in Urumqi with County in 2004 Something resembling optimism surfaced around Edgeley Park yesterday evening as, in a speech at the Sponsors Evening, former County Commercial Manager Steve Bellis , confirmed that the Club were attracting interest from credible people in China.   Bellis is well known to County supporters for the excellent work he did whilst with the Club. He has maintained strong links with China   and it is from these links that the current interest has sprung, more specifically from the family that owned Stockport Tiger Star. County toured China on two occasions   and played a considerable part in the birth of Tiger Star following the last tour in 2004. The Chinese at the time were particularly impressed by the Clubs philosophy which could be summed up thus- ` Never operate in an area or country without e
Post a Comment
Read more
More posts