Showing posts from September, 2013
Show All 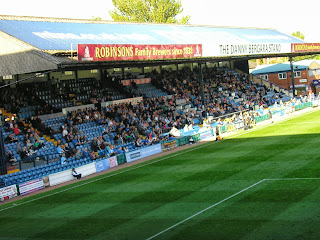 Well ....County are still in the F.A Cup, but only just after an almighty tussle against Brighouse Town of the Northern Counties East League( Premier Division) who proved very worthy opponents indeed  in front of over 1700 at Edgeley Park today. They won it 1-0 in the end , but without ever looking convincing , indeed the convincing stuff kept coming from the West Yorkshire side who could have been 3 or four up by half time had their finishing matched their approach play! Did County underestimate the task in hand......maybe........but great credit needs to go to the visitors who even in the last minute could have taken us all back to St Giles Road for a replay, as County defended grimly hanging on for a narrow but welcome win in the end! At 3 o’clock I felt that much depended on the blues mental approach to the game, and Alan Lord`s ability to get the best out of them! For sure we knew that Brighouse would be up for it, and would be roared on by a reported 200 or so travelling fan
Post a Comment
Read more

Booters.......Punters.....and Hatters It`s  ridiculous o`clock......06.00....a  time when most people are abed......Angela Moore is not, and she`s grappling with the double iron gates that keep the masses off Booth Street Car Park when they are not wanted! Already at that time the booters are queuing to come on and pitch up as are a few punters, who are  salivating over the thoughts of an irresistible bargain. It`s pitch black , but thankfully a few Help the Hatters people join her and its all systems go as the first batch of sellers vie for the best spots.                                                             Gate Crew on Alert! All concerned are relieved to see that the monster lake had been largely removed by the man from the Council, from just inside the entrance, so conditions were quite favourable for a good day- we just maybe needed the sun to shine on us!
Post a Comment
Read more

By Unknown - September 25, 2013
Minutes of the Stronger Together Supporters Group                                      19th September 2013                                 The Bungalow, Hardcastle Road. Mary McGee Wood, the Supporters Co-operative Independent Secretary in the chair opened the meeting with an update since the last meeting and decisions made from the Cooperative recent board meeting. For the Co-operative to be taken seriously and to showcase our professionalism the board decided not to express any views on who is going to be the next manager, management at the club and individuals.   The board have to be objective. Asset of Community Value ·         CAV application submitted. ·         CAV will go to the Planning Committee next for the final decision. ·         Confident CAV will be granted. Ownership of EP Will have an opportunity to speak with a Brian Kennedy representative when a credible proposal is in place. To have a
Post a Comment
Read more

THE PROGRAMME - record in verse of a match between Doncaster Rovers and County, Oct 9th, 1965 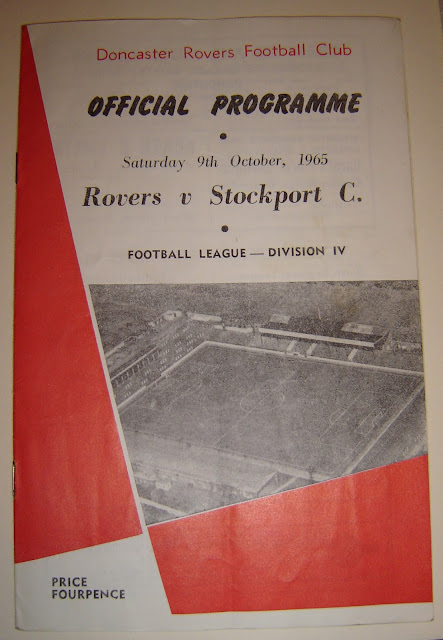 An old programme passed on through a friend of a friend can open up the past and reveal a world that was swinging and new when the mini skirt was a trend. At four old pennies, this nostalgic treat is flimsy and rare, black, white and red. A simple record on a throwaway sheet; for detail, look elsewhere. No fan of football, no County in me in October '65; only a distant link being Rovers and I shared the same GP. He kept all of us alive. Stockport County team 1965/66 On Saturday 9th, Rovers and County vied. The teams writ down in tiny type, hand-set. No mention of a manager for either side although Porteous was still in town. Donnie was about coal and council estates, hiring for the mine; a job for life. Pit villages were the satellites that provided the gates before Mrs Thatcher called time. Playing for County was Johnny Price 5ft 3" and with pace. Paired with Allchurch, they provided the crosses for strikers to slice and sometimes to
2 comments
Read more 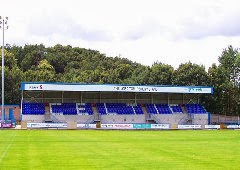 Backed by nearly 900 travelling fans, County came away with a welcome point from their encounter with Stalybridge Celtic at Bower Fold today. I fully expected another defeat before the off, but that fate rarely threatened to befall Alan Lord`s men, indeed, if forced, I will admit that the point was a fairly comfortable one. They defended well ....surprisingly well actually thanks in part due to the re-introduction of James Tunnicliffe at centre back. He gelled immediately with Charnock , and with young Scott Duxbury ( my M.O.M)playing an absolute blinder out on the left flank whilst Fagbola dealt with the right , there was little of the abject awfulness so prevalent of late from County. It was not perfect, not by a long chalk and I would say that, of the two teams, Celtic looked the more comfortable on the ball, but if we can address the continuing tendency to `pass without thinking’, and fine tune those shooting boots, maybe there`s hope for the immediate future, on the fiel
Post a Comment
Read more

Here we go again................   The Booth Street Car Boot Sales have been a regular feature of the Help the Hatters programme for some years now. They help to keep us afloat income wise and able to function as a group. The next one is this Sunday 22nd September  commencing at 06.00  running until 13.00. Angela has got her team together as usual so thank you all the willing volunteers! The start time  may strike you as a touch outlandish, but that`s the nature of booting, but the atmosphere amongst the volunteers is friendly and supportive ,and  no one is asked to do a 7 hour shift, or indeed start at 06.00 , just the hours that suit. So if you want a bargain nip along to Booth Street on Sunday....or bob along and offer to help!                                                         A typical HtH Car Boot Team! Blog   http://hedgegrower.blogspot.com    went past 27000 page views this week  with good stuff from Pauline and Graham keeping the quality up along
Post a Comment
Read more

Report of Stronger Together Open Meeting 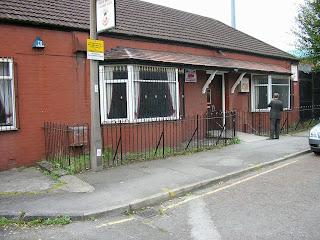 The third open meeting of the Stronger Together supporters grouping took place tonight at the Bungalow Hardcastle Road with Mary McGee Wood, the Supporters Cooperative Independent Secretary in the chair. Priorities. There was a report back  of matters that have been dealt with since the last meeting and Mary reported back that 3 clear priorities had been agreed upon to take us forward. These were;- 1 To get Edgeley Park  listed as an Asset of Community Value 2. To work to get Edgeley Park under the ownership of the Co-op / Council 3. Get the SCFC shareholders to write off their debts Status: 1 -  CAV application submitted will go to the Planning Committee of the Council next. 2, 3 - Both need more information as a first step, especially 3. Any offers of reliable information very welcome. Don't expect to see anything dramatic too soon. It was felt that clarification was needed from the Board and Shareholders as to what their current position was on key iss
Post a Comment
Read more
More posts