Showing posts from November, 2013
Show All

By Unknown - November 28, 2013
Stockport County Supporters' Co-operative Board elections 2013 Formal statement Seven nominations were received for the seven vacancies on the Board. The election is therefore not contested, and these seven people are returned unopposed: (in random order) John Gaskin Lee Townley Paul Charnock Billy Byrne Dave Marchbank John Fitzpatrick Pete Towey There will not be a formal "hustings" at the AGM. These names will be put to the meeting en bloc for approval. There will be an opportunity for the candidates to speak, but they will not be required to. A contested election was expected, but I respect the careful decisions of those who have decided not to stand, and I know that some of them will be working with us in less formal roles. While a contested election might have given us more credibility (and some excitement), I am delighted that we have seven new Board members with a good range of interests and experience, who all share a passionate commitm
Post a Comment
Read more 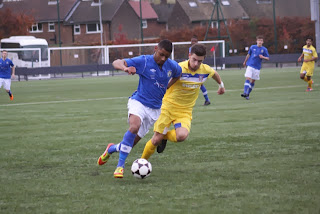 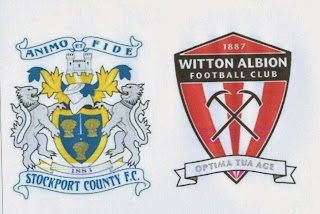 County put a turgid run of bad results behind them , to some extent, with a workmanlike 1-0 victory over Witton Albion at Edgeley Park tonight in the Cheshire Senior Cup. It was nothing to write home about ,to be fair but any win is welcome just now with the state of things off the park, and it earns the blues a game against Stalybridge Celtic in the First Round proper! A fairly strong side took the field for County, but strength did not guarantee   anything when it was undermined by error and twice in the first 20 minutes County were fortunate to escape unscathed after slack work had undone them at the back. Thankfully however   better things were happening further forward with Jevons looking good but unlucky to see Platt waste   a chance set up by the ex Ewen Fields favourite. Dickinson was another who looked the part early on and his shot on the turn, on 15 minutes, would have opened the scoring had not keeper Mat Cooper twisted in mid air to tip the sho
Post a Comment
Read more 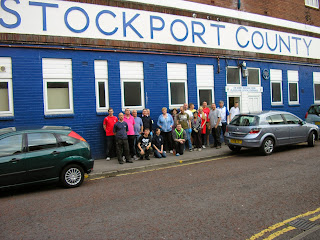 A league table of important football grounds gaining Asset of Community Value status would no doubt see Old Trafford and Anfield on top, followed by Ewood Park and Portman Road – each, in their time, home to the champions of England. But for the supporters of Stockport County, getting Edgeley Park declared an Asset of Community Value (ACV) feels like a table-topping achievement after the disappointments of the last few years. After much hard work, the Supporters’ Co-operative, backed by Supporters Direct, were delighted to hear that Stockport Council agreed with them that the stadium is a valuable community resource. As a result, under the Localism Act, any intended sale by owner, Brian Kennedy, would have to be put on hold for six months to give the Co-op a chance of raising the cash for a bid of its own. * Inevitably, the fans have emotional attachment to the stadium. You don’t have to be very old to have memories of wonderful nights and days at Edgeley Park: Danny Be
Post a Comment
Read more 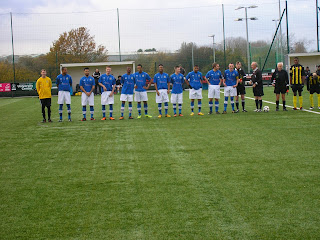 Stockport County Youth Team I guessed that after last night`s epic disappointment what you and I needed was a good news story ....preferably one with a County connection. Word had reached me, that the Borough   boasted a really decent team within its boundaries, one which was unbeaten so far this season, topping The Football Conference Youth Alliance with a massive 19 points out of a possible 21, and that team wore the blue of Stockport County and was proud to bear the Clubs name! Today`s game was at Stockport Sports Village Woodley and featured that table topping County team and Harrogate Town, who placed ninth in the table, so off I trotted , duff camera in pocket and sporting more layers than Scott , Amundsen or any of their ilk ever did, in time for the 1.30 kick off. County were quickly into their stride and looking assured, but Albert Keeling twice pierced the Town back line only to be ruled offsi
1 comment
Read more
More posts