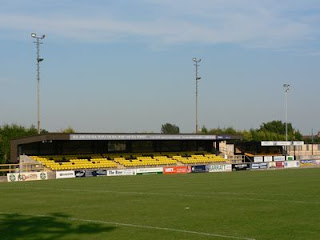 Scientists ,we are told, are close to creating a pill to cure jet lag, after research on mice had revealed a possible mechanism for speeding up the body`s response to movement across time zones. There were no time zones for County to cross today, just a 66 mile journey to North Yorkshire to take on Harrogate Town, but ,for sure, there was a pressing need for their circadian clocks to be better regulated than they apparently have been thus far this season, but there was no sign of this happening at Wetherby Road where they slumped to ignominious defeat in alarming style.
It was another abject exhibition of how not to win football matches as with the game stuck at 0-0, and half time just 8 minutes away, County suddenly lapsed into doze mode, conceding 3 goals in a 5 minute spell that sent them in at the break 3-0 down. This was reduced by one , late on in the second half, when substitute Iain Howard forced one in with 3 minutes left, but it looked like too little too late and that`s how it proved. Another desultory chapter in the continuing saga of County`s decline had been concluded, or so we thought, until news came in on the way home, that Ian Bogie had resigned opening yet another can of worms for County and their long suffering supporters.
Tunnicliffe was in at the start, and Jevons replaced the injured Dennis, but the rest of the team was as per Monday`s starting eleven at Edgeley Park- neither of County`s most recent signings having been cleared by the F.A. 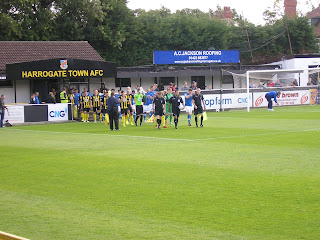 The two teams enter the fray!

The game opened with Harrogate testing the blue back line with a couple of high one`s- both dealt with by Charnock. That was interesting, but slightly alarming too as, a minute later, Ashley Worsfold sneaked his way to the by-line before planting the ball into the box. It looked iffy as Michael Woods latched onto the ball, but County`s luck held as the shot that followed went wide.
A long throw from Leigh Franks kept the pressure on forcing Jacobs to belt the ball clear in a hurry, but it came straight back via Adam Bolder who sent Chris Hall dashing clear. O`Halloran did well to block Hall`s shot ,and when Fagbola managed to head the corner that followed out, the first 5 minutes had passed with Harrogate constantly on the attack.
The next 4 or 5 minutes thankfully confirmed that County had attacking ideas of their own It began with the previously mentioned clearance from Fagbola and was taken on by Turner whose speed took him to the by-line where Mathew Bloomer was happy to concede a corner. This dropped at Fagbola`s feet but his shot on the turn was charged down by a bevy of yellow and black shirts.
The improvement continued as good work by Moke  saw Turner head over the bar from close in, but it was not long before Ormson was in action diving to his left to prevent Craig Nelthorpe`s cross from causing problems.
Harrogate thus far were looking well organised and neat in their approach play, but Worsfold overdid a bit of `fancy danning’ to ruin what was building into a decent move for the home side.
County had not opened all that confidently, but were showing signs of getting to grips with the situation a bit, with Moke and Turner`s pace being possibly their trump cards. Certainly Moke was getting involved and a link up with O`Halloran brought County a free kick in a reasonable position ,when  Turner was fouled by Anton Brown. Moke took the kick, but Harrogate defended in numbers and well, and it stayed 0-0. 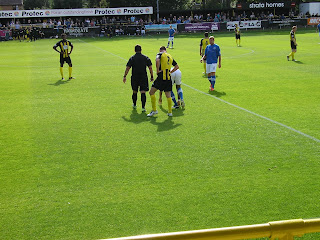 Verma takes a breather ( only joking!)