Hello again from Help the Hatters !
The week has been another busy one starting on Sunday when a party of heroes and heroins turned out with a view to painting the Hardcastle Road frontage, at the unreasonably early hour of 09.00! In the event the weather got in the way and when light drizzle turned to the heavy stuff the project was abandoned.With the season now upon us its an end of term thingy then in my view, but we`ll keep you updated.
On to Tuesday........and the final Working Party of the current close season captured here as the party dispersed for a well earned drink at the end...... 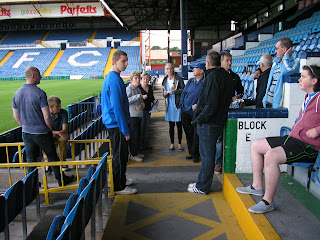 The aim was to fix as many advertising hoardings in place as we could and I think that this was achieved and the great turnout of 15 are to be congratulated!
My interest was aroused to see Liam Dickinson doing laps of the pitch for a time , but he revealed that he was merely `keeping fit' and had not signed for us!
Wednesday brought agreement with Phil Brennan to submit a HtH page for each match day programme- the first is done and will appear in the Boston edition this Saturday.
The Blog http://hedgegrower.blogspot.com meanwhile continues to flourish rattling up over 3000 visits in the 7 days since the last Update- total page views standing at 13800 early this morning ( Friday).
Loads of good stuff to come in the next 7 days including 2 match reports from the Boston game , and  the first away fixture at Workington. Pauline Coddington has a terrific item coming out on Monday next also, so watch out for that, and an item of some considerable interest has just emerged and I will be penning this and publishing later today. So keep the visits coming and thanks for your support!
So...what`s happening this week end and beyond?
Well.....on Saturday we will be selling the HtH County Yearbook outside the Cheadle End turnstile from 13.30. We need a couple more sellers to cover the Cheadle End Main Stand turnstile and the Main Stand one near the away end. So if you can help seek me out anytime after 13.30.
We are running a Car Boot Sale ( yes....the much delayed one from earlier this month) which goes ahead on Monday 26th starting at rediculous o`clock ( err....06.00). No need to turn out at 06.00- but if you can help at all at any time between then and 13.00 please advise Angela on angela.moore53@ntlworld.com or 07867856394.
There will be much to occupy our volunteer  supporters in the weeks ahead- the end of the Working Party`s( for now) does not indicate that we go into relaxation mode. Watch this space again for information, but I can advise that there will be a general meeting of HtH supporters soon to help map out stuff .