Unfortunately the news broke on Saturday last that John Fitzpatrick, Chairman of Help the Hatters, had been taken ill and admitted to hospital.
John is the archetypal workaholic devoting vast amounts of time in his week to help sustain Help the Hatters and Stockport County, the Club they are designed to support, whilst doing the same in his scaffolding business.
John is much loved and respected by all sections of the Club and the Stockport County family has been in shock since the news broke.
Thankfully John is now convalescing at home ,and we wish him a full and speedy recovery! 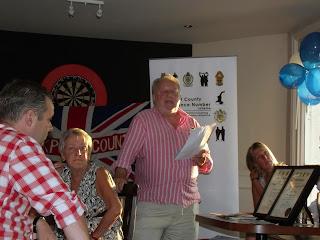 On Friday August 26th, John was in good form at the HtH Roadshow at the Armoury.
In truth it was a fairly low key affair , but everyone seemed to enjoy the occasion which included SCAN presentations to former County legends from the sixties- Barry Hartle and Hugh Ryden.
I am not sure when the next Roadshow will be, but one thing is certain it will be hard to beat Hugh Ryden`s response to his presentation when he expressed his distress at County`s current plight. Hugh pointed to Chester , and noted they were on the rise again stressing that `If they can do it, so can we!'- well said Hugh! 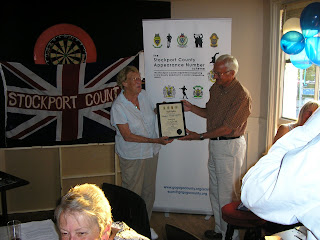 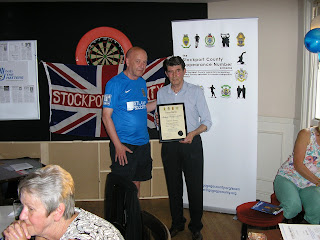 
The Roadshow was the scene of the launch of the Help the Hatters Yearbook- a magnificent bargain buy at just £2, and it was on sale again on Saturday when County entertained St Mirren of the SPL at EP, and the following day when the Stockport County Annual Cricket Match was staged at Offerton CC. The game was badly affected by rain which turned torrential after the County players had closed their innings on 106 for 7.The innings featured excellent knocks from Lewis King , James Tunnicliffe, and Kristian Dennis  and we are grateful to those of the squad that took time out to play- namely James, Kristian ,Jordan Fagbola, Kieran Charnock, Brandon Windsor and Stephen O`Halloran.
Peter Ward was a hero ,leading the fans team,bowling a tasty mix of flighted filth and dodgy dippers, but it was to no avail- match drawn!
A very soggy yours truly having patrolled the boundary in the rain ,then went home for a sulk after being deprived of a chance to humiliate myself further with the bat!


What`s coming up for Help the Hatters then?

This goes ahead on the Tuesday as normal, meet circa 18.30 with the object of painting the front of the Hardcastle Road Stand( the blue bit!). This is pretty much our final task as far as Working Party`s in this close season is concerned . It depends how much we can get through of course, so there may be another, but I will confirm when we know.
Whilst on the subject of painting, it would be remiss of me not to draw attention to the excellent work done by Dave Barry throughout this close season. Dave has attended every WP in the evenings and in addition has put in an incredible number of hours, entirely of his own volition, during the days. Typical of the selfless effort that keeps this Club alive- well done and thanks Dave!

These will be on sale at every pre season match and on into the season. If you want to buy one, and they are a must especially for travelling supporters, then I will be set up outside the Cheadle End turnstiles on match days. If you want to help selling,  see me  before the match ( 14.00 for a 15.00 k.o/  circa 18.30 for 19.45 evening game). 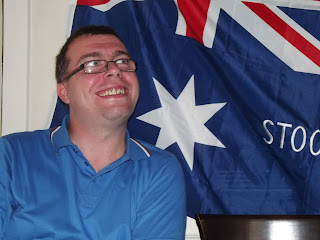 
There is a possiblity that Help the Hatters will be involved ,providing refreshments at the Development Squad game currently scheduled for Monday August 5. I will confirm yes or no on this soon as possible.