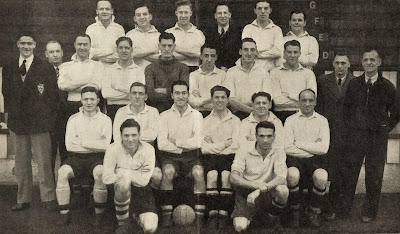 I’ve always liked Blackpool.   Doesn’t matter if it’s a cold wet wintry day or the middle of summer, I still like it.   My family and relatives always joke it’s because I was conceived on a charabang trip to the illuminations in September 1929 and that I really belong there.   The fact is I was born in Stockport in 1930 and always enjoy going back whatever the occasion.    I’ve been there to Stanley Park for Lancashire County Cricket matches, to the Winter Gardens for Trades Union Conferences and numerous times just because Blackpool is Blackpool. 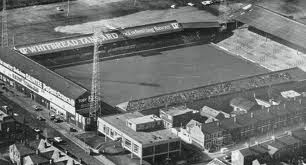 My fondest memory, though, is of going there was on a January day in 1951 to watch County give one of the best displays I can recollect away from Edgeley Park.   We had beaten Brentford at home earlier in the month, in the 3rd round of the cup, and we got a visit to Bloomfield Road for our reward.   At least in those far off days Blackpool were one of the better teams in the then first division of the football league so there was certain to be a good crowd.   In fact it was 32,000 of whom 5,000 were County supporters and I was one of them.   I was in the Royal Navy at the time but I was fortunate to be stationed at the Royal Naval Air Station at Stretton, near Warrington so it was fairly easy for me to get home to Stockport on my weekends off, and I made sure I was off duty that weekend.   One of my friends had queued at the Park to get me a ticket and booked me a ticket on the excursion train that was running especially for the match.

And so we arrived in Blackpool that Saturday lunchtime.   For most of us it was a visit to the chippy and then to the pub for a swift half and on to the match.

We had read what the teams were to be in the morning paper and I suppose, like most of the other County fans, I was a bit overawed by their forward line – it read Matthews, Mudie, Mortensen, Brown and Perry.   Just about the best in the country at that time.   The defence wasn’t bad either – Farm, Shimwell, Garrett, Johnston, Crossland and Kelly.   Anyway when you go to an away cup match you go to enjoy yourself not to worry too much what the result will be.   If it’s good one it makes it all the better. 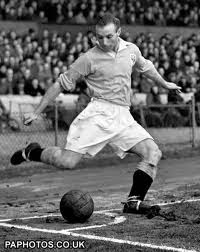 County’s team was almost their usual one of Ward, Staniforth, Monks, Emptage, Glover, McCulloch, Dixon, Black, Cocker, Dick and Oliver.   The only regular missing was Tommy Moran.   So that wasn’t bad then.

Kick off was at two o’clock and by five past we were two down.
Whoops what happened.   Well in the first minute Matthews got the ball from Johnston, carried it to County’s dead ball line and, although there were strong appeals that the ball had gone out of play, he crossed it to Mortensen and goal number one.   Worse was to come after three minutes Bev Glover cleared the ball out for a corner.   The kick was only partially cleared and Mudie pounced and it was goal number two.

I know what you are thinking at this point.   I must be out of my mind saying that this was one of County’s best performances away in the cup.   But from then onwards, as it was reported in sports pages of that nights West Lancashire Evening Gazette, it became Stockport’s match.   Their reporter said, “This was an escape for Blackpool.   A match which threatened to be a Stockport massacre became a Blackpool retreat and a replay could have been forced without outraging justice.”

So what happened then.    Well County got their act together and forced Blackpool to defend and this they had to do in depth.   It became one way traffic and, to once again quote the local Blackpool press, “the Third Division team’s football had a pace and punch in it, and a quality, too, which outplayed Blackpool.”   The County faithful did their bit too.   Their 5,000 voices drowning the frantic pleas of the 20 odd thousand local fans for Blackpool to buck up.


For the rest of the match there was only one bleak moment - on twenty minutes - the referee’s parentage was called into question by the County faithful when he awarded a penalty for handball against Ronnie Staniforth (even a blind man could have seen it wasn’t deliberate but ball hitting hand and not the other way).   Dennis Ward our goalkeeper was the hero of the hour and brilliantly saved Garrett’s thunderbolt shot.

The rest of the half went with County creating chance after chance but with Blackpool mounting an eleven man defence it wasn’t going to be easy to put one away.   The second half continued in the same vein.   In fact it wasn’t until five minutes from time that Blackpool got their second corner.    By contrast, County’s 12th corner of the game brought them a goal.   A quickly taken one from Dixon to Cocker saw Les cross the ball for Andy Black to head home to tumultuous applause from the crowd.   And it is pleasing to note that the home supporters also cheered the goal.   They also appreciated that it was a richly deserved.   Unfortunately that was the end of the scoring.

When the final whistle went, to the audible sense of relief from the home fans and also that of the home team, the teams left the pitch to a great ovation from all the fans.   As we left the ground, and remember this was in the days when there was no segregation so we all left from the same exits, many of the locals congratulated us County fans and said that ‘Pool had been lucky.   Well we knew that but it was nice of them to tell us that they thought so too.

The journey home on the train was quite noisy with lots of singing etc.   Not once did I hear any criticism of any County player.    It was praise all round for all eleven of them who wore the black and white that day. (Oh!  All right then so Ward was wearing a green jersey.)   But our Third Division North team had certainly given a good account of themselves on that January day in that seaside place called Blackpool.

Finally, I hope that you have enjoyed my reminiscences and found them of interest........ 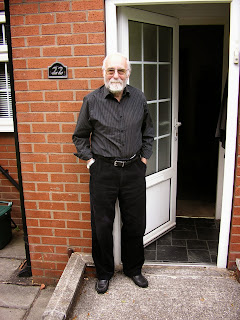