A Thug...A Linesman and Violence at The San Antonio Stadium Ibiza! 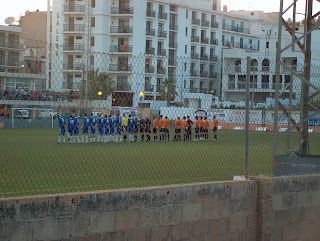 It was 12 July 2006 and County were cruising to an easy victory against  UE San Jose in the San An Cup at the San Antonio Stadium .
The game was in its eightieth minute and drifting sleepily to its inevitable conclusion  when ,with play some fifty yards or so up field Liam  Dickinson was seen remonstrating with a clutch of Spanish players .
In an instant the soporific atmosphere evaporated as players came over from all parts to drag Dicko away .
At first I thought “oh bugger Dicko’s lost it-how unusual !”
The truth could not have been more bizarrely different however !
Although what had gone before had been unobserved by most spectators and officials in the stadium , a full account was forthcoming later mostly provided by the half dozen Hatters who were watching a metre or so away from where the incident occurred on the building site adjoining the ground . 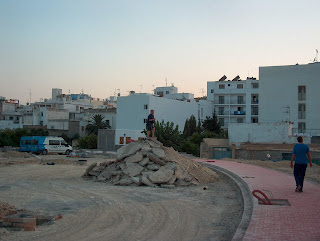 Unofficial viewing spot for the game1

It turns out that ,whilst play drifted up field , one of the Spanish players ran at speed towards the liner on the far side of the pitch .
Stopping immediately in front of the official the player firstly wagged his finger in the liners face and then promptly head butted him .
Not content with this he then stamped on the fallen man.
Unsurprisingly the liner stayed on the ground ,apparently motionless , for some twenty minutes or so tended to by County’s admirable Club Doctor before ,eventually he was taken to hospital still not showing any conspicuous signs of   recovering . 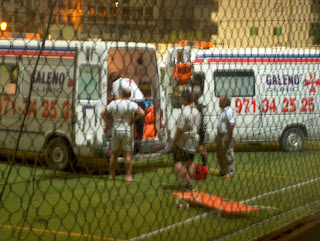 The liner being taken to hospital !

The game was abandoned midst all the mayhem !
I have never before exhibited any concern over the health of a linesman or referee-the following day however I was not alone amongst County fans in wanting to know how the liner was faring .
The only  information from tour promoters Playhard  was that he was “ OK”.
By the evening  seeking more and better information I approached the hack from the Stockport Express who somehow managed to maintain a  straight face whilst offering the dubious  explanation that “the liner was fine…..he was in work ( driving his taxi that morning ) and the incident in fact  was all a complete accident due to the fact that the liner was prone to panic attacks “
I could not help thinking, in response, that I too would be so prone should someone chance to give me a Glasgow Kiss and then proceed to jump on me in an uncontrolled frenzy!
This was perplexing and disappointing, but on arrival back in UK matters did not improve..........
If you were depending on the Stockport paper to bring you news from Ibiza you would still be waiting for an accurate account of the affairs of that evening - no `accident’ …no match abandoned ….nothing  appeared in print, that week....the week after, or in fact ever to my knowledge.
So .......it never happened did it? Well .....I was there.....it most certainly did happen ,and  I have the pics and some video footage of the incident to boot( copy video clips supplied on request)!
There was another tournament the following week so perhaps you can see ,if not agree with , why  Playhard desired to play matters down, but to this day the silence from everyone else on the incident has to say the least ,puzzled me!
And now those video clips, kindly supplied by County Supporter Derek Bailey, of the aftermath of the assault , and a couple of bonus vids of fans tournament .

Now the Fans Tournament clips( are you in there ?)
And this pre kick off clip :-


Big thank you finally to Derek Bailey for supplying the video clips.