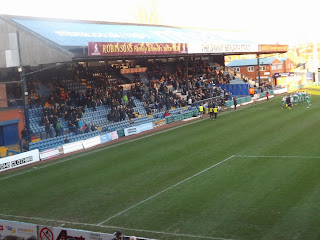 There was unmistakeable evidence that Alan Lord`s blue and white band wagon is beginning to roll slowly forward at Edgeley Park today, as Stockport County claimed another welcome 3 points whilst disposing of Bradford Park Avenue by 4-1.
If the opposition was not all that it might have been, County went about their work in an exemplary professional manner, never being in danger of losing their lead thanks to another good team showing. Team showing did I say? Well yes I did, and it definitely was one, but one in which individuals stood out.....Liam Dickinson leading the line like the seasoned pro he is- with good close control allied to an eye for a telling pass, and finished off with a fine goal.

Platt, in for Moses, was heartwarmingly busy throughout, as was Turner, who`s pace threatened to undo the Yorkshire side more than once. Young Rhys scored one too, and a typically good finish it was too, earning him the sponsors M.O.M award, but Scott Duxbury cannot have been far behind in the award stakes giving us 90 minutes of gritty purposeful defending!

Yes ....it was a very satisfactory performance.....not perfect....we still need to brush up those clearances out of deep defence, and improve concentration at times and thus avoid spilling possession, but I nitpick and must say that pretty much everyone I bumped into going home, looked well pleased with County`s performance!
At 3 o`clock it was virtually the same 11 that was on show on Saturday, except that Moses, who had had a decent game, was nowhere to be seen, being replaced by Platt. So... with Bradford allegedly not being in too great form of late, there was much to look forward to, even if the well known County propensity to screw it up against lesser sides had to be taken into account.
Straight off County went on the attack and it was soon plain that Bradford could not handle Dickinson who`s early flick on caused alarm bells to ring loudly for the visitors back line. They did no better with what followed either, but somehow survived the first minute without conceding a goal, as Howard slung the ball across from the left aimed at Turner. It had altogether too much oomph about it and went out to spoil the party somewhat.
If celebrations were put on Xmas ice, it was not for long as Fagbola stopped a Bradford raid sending Jacobs scooting clear. In a flash the ex FCUM man picked out Dickinson on the edge of the box, and in another flash Dicko fashioned a controlled turn before dispatching a lethal strike way beyond the groping hands of John Lamb, the BPA keeper.
Three minutes had gone and we were one up.....brilliant!
For a moment it looked likely to get even better as Platt slid what seemed like a good pass into the box for Turner to go for, but it was far too strong for Turner`s needs and any chance was gone.
The sixth minute saw County down to 10 as Cowen went off for further treatment after taking a knock ,one of many the blues players were to endure from a Bradford side that didn`t shrink from more than the odd iffy challenge!

Referee Joseph Johnson responded with a seemingly unending stream of free kicks   , to the accompaniment of a precocious solo for whistle. Symphony.....concerto....I couldn`t make out, but it was irritating for a fair chunk of his ire was aimed at County, not always fairly – I`ll put it no more boldly than that!
Cowen came back eventually and no alarms had been triggered in his absence indeed Bradford seemed the very essence of docility at this juncture!
Dickinson on the other hand was on fire and went close with a header, on 11 minutes, from a Duxbury free kick, before losing out a minute later to Adam Clayton as Turner picked him out after a pacy run.
By the 12th minute one Yorkshire name had gone into the referee`s book, but no one followed even though Fagbola was laid out by a thoroughly bad tackle from someone in green. A chat and free kick satisfied Mr Johnson, but not me and those around me, and our displeasure mounted when the kick was cleared and Ian Ormson had to come out quickly and find touch with Alex Davidson bearing down on goal on the break.
A couple of Bradford raids came next- the first dealt with comfortably by Cowen, who was again looking assured in the middle of the blue back line, and the second by Duxbury who did really well to cut Davidson off when well placed.
Howard went close with a cross, before a third Bradford raid almost counted, as Jordan Deasey slid a neat ball into the box to Davidson. The forward`s response was immediate- he fired in a shot, but with Ormson beaten, it missed out by barely a foot! That had been an escape, could County now put it behind them, tighten up....and get on with winning this game?
Well......................yes.................., but initially they seemed to be struggling to latch onto the ball and then do something with it......and then suddenly they could, or rather Dickinson could, and an immaculately delivered ball from him opened the flood gates for Help the Hatters sponsored Rhys Turner, who ran onto it before beating the keeper with a finish every bit as precise as Dickinson`s pass had been. It was 2-0 now and we sensed perhaps something special in the air!
By this time however, Mr Johnson was well into the second movement of that annoying symphony, and County had the latest iffy free kick to defend, 23 minutes in, and it was a decent one as well from Nathan Hotte, and the blues did well to keep it out. Platt did the biz in this respect triggering a County break whilst doing so, and Lamb did particularly well to stop Turner reaching Howard with his final ball!

Despite the Bradford raids I have related above, County were pretty much on top......Duxbury just kept out on a run down the left......Lofthouse unlucky with his free kick- whipped in at pace and only just kept out. The corner that followed, saw Dickinson`s shot strike a defenders hand in the box, but Mr Johnson was unmoved and it stayed 2-0, at least for now.
Bradford still managed to annoy, as they stepped up the beefy limb threatener`s- Jacobs free kick releasing Dickinson who in turn sent Turner dashing clear once again. County could not find a way through even though it looked that Bradford were doing their best to assist their opponents, with some really slack defensive work.
On it went with Turner winning the ball before sending Howard through. A chance definitely, but the liner`s flag came to Bradford`s aid and stopped the raid. I was not pleased with the outcome, but I was with Turner`s input- his new found ability to go in for the ball and boss his man off it. Great stuff, probably the result of AL`s expert coaching or example from the likes of Jevons, but also of the player`s growing maturity! 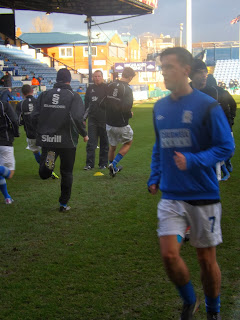 The 30th minute saw a foul( another foul) on Dickinson give County the sniff of a third, but when the ball was lifted into the box and Cowen went for it- he was promptly brought down, with no response at all from the referee- gruesomely bad!
So far, despite Mr Johnson`s input, I was liking a lot of what I was seeing.....Platt, Dicko and Turner were linking up well....Duxbury and to some extent Jacobs were getting forward to good effect, and the centre of our defence looked comfortable, and momentarily it got better, with less than 15 left of the half, when another neat move surfaced from County. Dickinson started it off- linking up with Jevons before taking the return pass from his captain. Dicko then held it up fantastically well before releasing a beaut of a ball into the box where Platt was rounding on it. It was a chance for sure, but Platt fluffed it allowing the ball to drift slightly away from goal prior to then losing it!
More came from Dickinson and Turner- the former sending the latter clear, only for Scott Maxfield to block the route to goal and clear the ball. 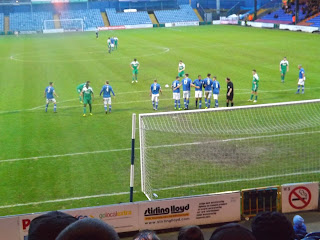 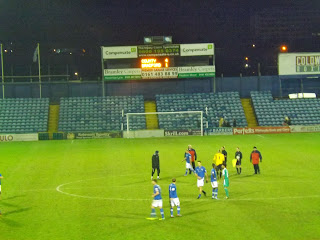 It was entirely consistent with what had gone before, but no less irritating, and the final whistle was a welcome sound, and the signal for mutual acknowledgements from support to team and vice versa.
Good stuff County.....keep it up !