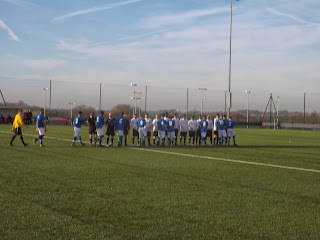 County`s swashbuckling Youth team staged a remarkable fight back to keep  their unbeaten record intact against Gateshead  at Woodley today, coming back from being 1-3 down at the break to share the points in a thrilling 3-3 draw.
It was a  crackerjack  of a game in which both teams asked much of their opponents defences.
Up front Gateshead had a powerful operator in Connor Halpin , and with David Carson and John Blake weighing in with decent skills as well, it was clear from the outset that County had a game on their hands against the only other unbeaten side in the division.
Fortunately in captain Liam Murphy they had the qualities to take the blows and come back fighting , and in Nick Williams and Kristopher Livesey two redoubtable defenders who along with the reliable  Ainsley Mantack always kept County in it. 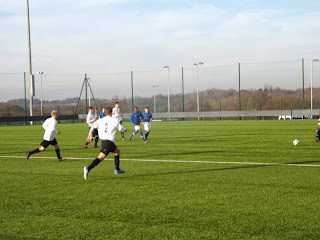 Kameron Palmer had scored County`s goal in the first half ,whilst the visitors replied with 3 ,so it needed something special  to turn things around and it duly came via opportunist goals from Demell Cumberbatch and half time substitute Kiarno Samms.
Back to 1.30 then, and Gateshead were first onto the attack coaxing two decent defensive headers from Kris Livesey, and....having weathered that early storm things looked up as Ben Spibey darted clear, but the liners flag halted his gallop  to keep it at 0-0.
Connor Halpin then sallied forth with the first of a match long series of powerful runs, but again Livesey showed up .....right place....right time....to shepherd him out of the danger zone!
It continued in much the same vein with both teams aching to push forward, and Gateshead keeper Shaun McDonald did well to get down and deny Kameron Palmer on the end of a good run by the Stockport number 7. 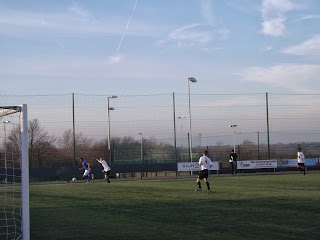 Gateshead replied quickly to the last action only to see Carson`s shot just carry the bar.
Good work from Nick Williams plugged a gap and sent County searching for something up the park, but suddenly County lost possession in mid field and a thunderous drive from outside the box from the Head number seven beat Adam  Rigby`s dive to give the visitors the lead.
County came back at their opponents without delay  and Ben Spibey was unlucky to see MacDonald beat his goal bound effort out bravely. Mac Donald probably fancied a rest after that last action, but none was on offer as the skilful Callum Jones sent Liam Atkinson in with a neat pass, forcing  the keeper to produce another good save to keep it at 0-1.
I had to pinch myself at this point as only 10 minutes had been played- a whole match worth`s endeavour and skill had so far been on show, could County redouble their efforts and equalise though?
They certainly tried....once....twice Cumberbatch ran at the heart of the Head defence followed by a run from Rodney Ajayi, but there seemed to be no way through the north easterners defences which were well organised.
Although County were looking good going forward, Gateshead so far anyway, were coping OK, and they continued to look menacing on the break, usually via Halpin , and Nick Williams did really well to stop him as he powered into the box on the break.
Good work next from Ajayi , and County had it on the break through Palmer who shredded the cover out on the right before planting a beaut of a cross at Spibey`s feet in front of goal. It was a chance but in an instant it was gone as the ball ran away from the County forward. Spibey did better moments later with a neat shot on the turn, but yet another diving save from MacDonald kept it out and it remained 0-1.
Not for long however  as the next County raid ended with the on fire Palmer planting a good finish out of MacDonald`s reach into the net. Twenty minutes had gone and the teams were level again!
There was a slight interruption to any County celebrations as Carson slotted the ball home for Gateshead, but he was clearly offside and County had escaped, but would they learn from it?
For a time it didn`t seem to matter as Murphy was pushing his men forward in typical sergeant major style, forcing a  corner which clipped the bar , 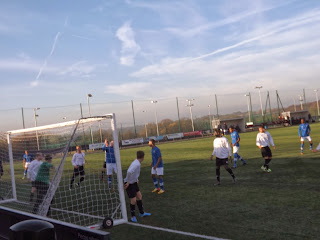 but Gateshead`s strength on the break told ,on 30 minutes, when Carson followed up a half cleared free kick to beat Rigby from close in.
Spibey found MacDonald again too switched on shortly after, the keeper denying young Ben at the last gasp, but all this while it was  apparent that if County gave Gateshead any leeway on the break, they would kill them stone dead, and County looked relieved to survive  pressure as a free kick pushed them back. 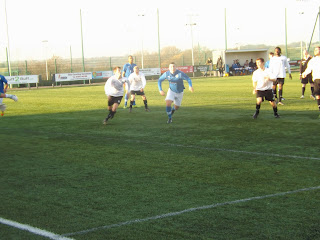 That was OK then, but then it wasn`t as Halpin burst clear again and was heading for goal. Rigby advanced to meet him but was easily beaten by Halpin`s shot to give Gateshead a seemingly impregnable 3-1 lead.
It was almost half time, but there was time enough for a Murphy free kick( the liner first off signalled a penalty) to cause panic with Jones and Williams vying to reach it, and then for a shot from the Gateshead number seven to thunder into the post with Rigby beaten. In the play that followed , Williams emerged with great credit, but County would probably have been glad to hear the referees whistle and the chance to re-group.
The re-start saw Kiarno Samms and Albert Keeling on for Ben Spibey and Rodney Ajayi, but it would take a herculean effort to dislodge this gritty set of north easterners , who opened the second 45 with Halpin firing one just over the top.
The opening minutes were all Gateshead and Livesey did well to usher a cross from Blake to safety when disaster threatened. Then Williams and Livesey both made telling defensive interventions with Gateshead very much seeking to put the game out of County`s reach.
It was a full 6 or 7 minutes before the siege of the County goal was lifted via  Palmer`s run down the right which came to nothing. What followed on though...did, and it was started by a foul on Cumberbatch by Nat Watt. The free kick saw Williams and Samms trying to reach it and force it home- neither succeeded , whereas Cumberbatch did, nipping in again to beat the keeper with a smart finish.
The game had swung full circle now, and County were in the ascendancy, as Williams went close as did Samms, but he went a tad too close to MacDonald and was laid out for his pains. 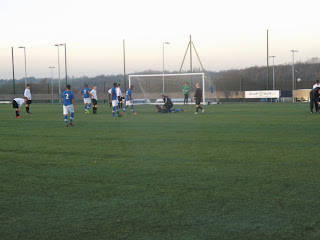 Injury apart, this was good to see as all County hands were applied to the job of getting that equaliser......Williams up with almost every attack and certainly every set piece.....Murphy still giving us those surging runs, and Samms....fresh from his holiday gagging for a goal, and one duly came thanks to a run by Palmer who sent a tasty tempter to the back post where Samms did the rest...it was 3-3!
There was still 30 minutes or so left and much to do for both teams , and they went at it hammer and tongues...Williams not that far away again with an effort for County and that number seven again on the spot with a shot that crashed into the bar before going to safety.
Play whizzed from one end to the other ...County pushing Head back with corners and free kicks - Samms denied by a packed Gateshead rearguard.....Williams on hand to kick a Blake shot off the line whilst Rigby dealt with a couple more from Halpin and Carson.
County had a lot to do at the back and had much to thank Williams , Livesey and Murphy for in this period. But...it was not one way traffic indeed Gateshead hung on grimly as Samms surged clear only to be denied by MacDonald`s legs!
It went on....Murphy engineering a County raid.....then Livesey and Williams working wonders  with  a series of classic last ditchers! Phew.....it was hot stuff out there....just who would win?
The answer of course was ....nobody, and 3-3 it stayed which was about right!
It had been a great fight back against a really good team and County had showed they had what it takes when the chips were down!