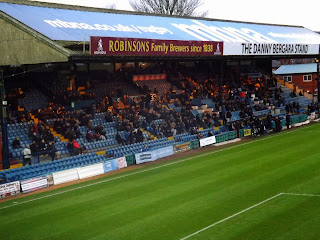 Not Everyone was Xmas shopping!

County`s lowest league gate of the season were on site at Edgeley Park today to witness a performance, from their team, as dire as one could wish not to witness in this most forgettable of seasons. It was truly appalling and fully merited at least the two goal margin Town ended up with. Yes.....as usual....the crowd was not the problem, in fact they were awesomely supportive at times – in good form in fact- would that we could say the same of the 11 men sent out in County`s name to do battle- they still give the impression of not being fully cognisant of the requirements of this division, which with some cold Tuesday nights away from EP in prospect in the new year, rings ominous warning bells!
Despite the introduction of Adam Cowen at centre back( he did reasonably well),It was the mixture as before ,only more so.....pretty football( too pretty at times), but no bite as Brackley were constantly first to the ball and altogether more likely to do something with it when they got it! They were in fact another team in the archetypal Skrill North mould- tight(ish) at the back with a liking for quick incisive passes when moving out of defence and plenty of fight!
County did all right for an hour or so but then, faced with conceding a trademark softy, they suddenly folded. Turner hit the post late on but by then Brackley had scored a second and were in cruise mode. 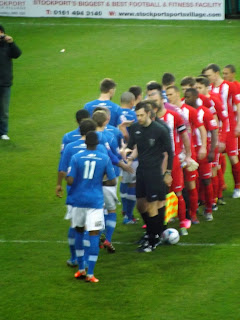 None of these trauma`s had announced themselves circa 3 o`clock, as County took the field with a fresh central defensive paring of Adam Cowen and Jordan  Fagbola. Cowen was well over 6 foot 5 so I was not alone in looking forward to seeing how he would fare! There was an attacking look about the County line up with forwards Jevons, Dennis, Turner and Moke on show, so perhaps we were in for a treat from County?
Well.......I allowed myself to think so anyway and Moke encouraged me by latching onto a decent ball from Jevons and tying 2 or 3 visiting defenders in small knots for a moment or so. The moment passed however and it was not long before it was `sharp intake of breath time’ as Steve Diggin managed to ping a cross over despite the best efforts of Duxbury to deny him. Jacobs cleared up field, but 3 minutes had gone and already we were being warned! 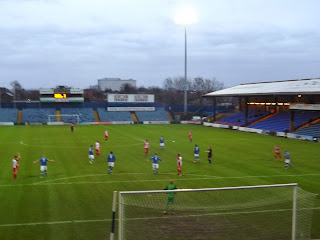 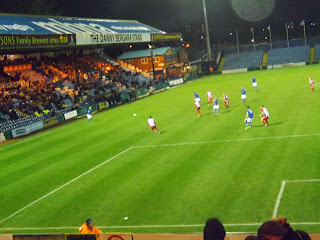 It was no more than 6 or 7 minutes in reality, and I was quickly wishing for more of the same to return, as on 74 minutes County leaked another goal...another bad goal. Another long throw started it and County had numerous chances to clear....didn`t.....this time setting Diggin up for an unchallenged strike on goal- he duly obliged and it was 0-2!
Two down.....game seemingly over, but I could hear to my right the regulars on Row R revving up the singing. The ditty was ` Come on County` but the 4 or 5 hardies persevered belting it out as others slowly joined them! Great stuff! 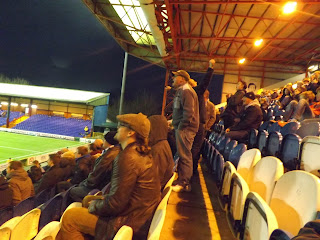 On the field things were disintegrating fast for County as Story cut a swath through the blues defences down the right. Fagbola hacked it clear eventually...only for Tom Sharpe to ping it back again, sending Story and substitute Charlie Griffin ( 20 goals in 35 starts last term) bursting clear down the right. Jevons cleared this time, but.....bugger.....back it came again, but thankfully Walker was offside and County`s angst subsided if only for now!
It was dispiriting stuff to watch, but now the noise was coming from behind me from the Upper Tier who were giving their team hearty support, which continued until the final whistle- fantastic stuff!
Meanwhile County had defending to do....lots of it- Cowen doing well to head a corner clear and Fagbola doing likewise as Diggin threatened on the break. 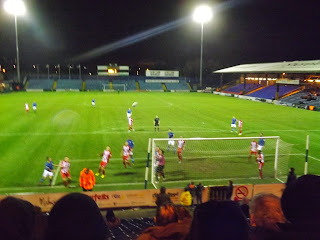 Late County pressure.
Lofthouse came on late on for Platt and twice was unlucky with attempts to bring Dicko into the game at the back of the box. Then....out of the blue...a shot from Turner hit the post and stayed out.
The 4 added minutes were 4 too many really, and I was greatly relieved to hear the final whistle. 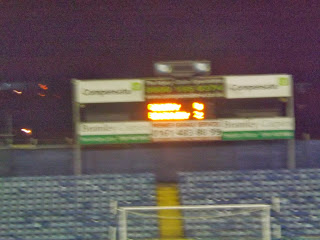 Oh...well...you didn`t really want to see the score did you!

I really do not know what to make of this performance- it goes without saying that we should be at least winning our home games as a minimum requirement for survival. This is just not happening and it`s a collective malaise rather than any one individual or group thereof that are the cause. We do have 6 or 7 players playing at the highest level they have ever performed at- whether this is a factor I do not know but it must be hard for the team to function properly with so few seasoned experienced pros to call on in a division in which a grasp of the basics is an essential.
AL has a tough job on his hands and badly needs the inspired support his team received today to continue. After next Saturday`s march....I have no doubt at all that it will!