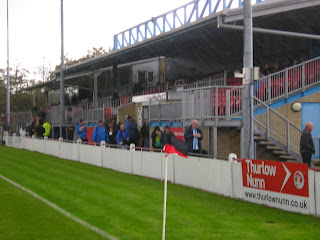 Both sides had chances in an interesting first half,and when Turner had to be replaced just before the break, we were not unduly alarmed , and this view seemed just about right when, 2 minutes into the second half, Duxbury gave County the lead. County`s elation however, was short lived, as within 5 minutes Histon had equalised when Peterborough loan man Shaquille McDonald took advantage of none existent marking to head home the equaliser. Add another defensive blunder, by Tunnicliffe,with 11 minutes left and that was that.....County folded and the points were Histon`s! 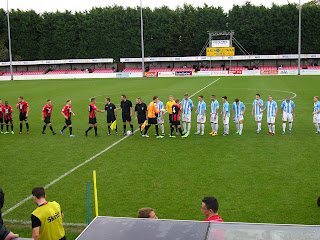 Desperately disappointing stuff then but none of this was clouding our vision circa 3 o`clock as the Flyer delivered us to within inches of what turned out to be a really decent stadium, in good time to get a bacon butty...some questionable minestrone soup ,and settle down.
County opened reasonably brightly with Verma on the end of a decent move, but thwarted by a line of red/black shirts. Jacobs kept the pressure on , and his link up with Turner promised much until Grant Roberts intervened and lumped the ball clear.
The staple from the home side, at this early juncture, looked to be the long ball out of deep defence, and just 4 minutes in McDonald was dashing clear...a veritable blur of speed that made Turner look snail like in comparison......it was a clear chance but only until Ormson rescued the situation and charged to the edge of the box to snatch the ball from McDonald and whack it clear.
A minute later and County had Histon on the rack as Dennis sneaked clear down the left. Drifting inside, his shot looked worthy of a goal, and keeper Calum Kitscha added to this impression by stopping it but not holding onto it. It spun towards goal, but somehow stayed out leaving County contemplating the consolation of a corner. This had danger written all over it but Kitscha managed to get a hand to it and stop Tunnicliffe from snatching an early goal. 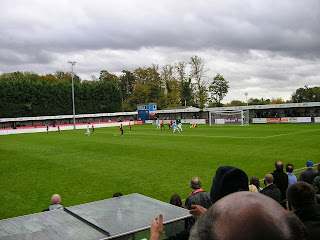 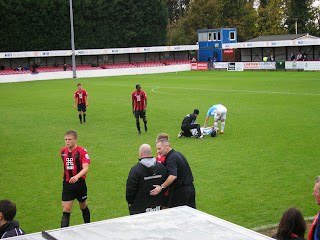 The half ended with Histon on the offensive and Ormson in action yet again diving to push a shot by McDonald around the post, as  his defensive colleagues strived apparently to perfect their traffic cone impressions! 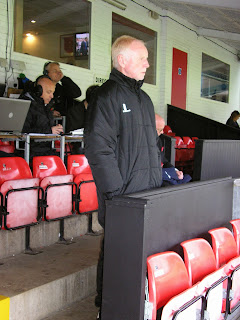 A push by Dowie was spotted by the referee, ending County`s discomforture, the half time whistle followed soon after and a fairly competitive first half had run its course.
It was depressing for me to admit that I had Ormson as my M.O.M at this stage, but perhaps County would rally and despatch my growing cynisism to the four winds!
I was distracted during the break, by an appeal for ` a qualified official`. Apparently a linesman had become incapacitated and couldn`t continue. I pondered offering my assistance, but concluded that perhaps 3 O levels and 2 years as a hockey umpire in the Stockport Womens League were not what was required. A long delay ensued and when the game eventually resumed I was alarmed to see that the referee had shrunk by about 2 feet! It was one of those days- I told myself!
All this was but a mere baguatel, within 2 minutes of the re-start as County surged into the lead.
It started with a Howard run down the left and a corner when October intervened. The kick went to the near post where Dennis headed it on to Duxbury who forced it home from close in!
That was just what was needed......in fact more of the same was needed but despite another neat move involving Howard and Moke , Gosset `s shot narrowly missed out!
Howard then went close – the keeper saving his header from Tunnicliffe`s free kick, but it all went decidely pear shaped and just 5 minutes after County had taken the lead!
Shephard began it by tricking his way past Howard. He then picked Dowie out with his cross , but he fluffed the chance, and the follow up by Taafe carried the bar.
Danger gone then!..............except it wasn`t because, when a cross came over from the left...County stood and watched to a man as Mc Donald headed home in splendid isolation in the box!
That was simply abysmal.............and the cosh continued to descend on the blues who were looking less and less like winners as the game progressed.
County tried to respond, but always the approach play was undermined by dismal finishing as Howard...Verma....Howard again lifted lack lustre efforts over the top.
Moke.....for a moment looked to have done better ,getting to the by-line, but when he crashed to the ground under pressure from O`Malley, I was slightly surprised to see the referee signal a corner rather than a penalty!
When Histon regained some composure and took the game to County again it took some resilience from the blues to resist as Taafe and October harassed the life out of us. A head of steam was building now for our hosts and County were relieved to see a volley from Hicks deflected for a corner. Shots rained in ........from Hicks ( blocked) and O`Malley  who lifted his shot over the bar. 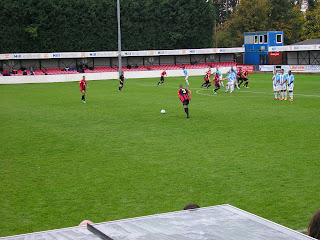 One of many Histon free kicks.

At the height of all this attacking, I was amazed to see McDonald taken off.......substituted....I could not believe my eyes ,but nevertheless couldn`t resist getting  to my feet to applaud.
There was no immediate cessation in attacking from Histon, as Hicks and Taafe brought the best out of Duxbury, but County did have a go at getting back into the driving seat only for Kitscha to deny Verma with a good save, and Tunnicliffe to surprise us with an energetic run up field that saw him into the box. He then went to ground midst a mix of flailing limbs and appealing glances, but the referee was not impressed and County got nothing from it.
Gosset then completed his stint in County colours, leaving the scene to a decent reception, as County struggled to contain Histon as a welter of free kicks were conceded in difficult positions- one such skidding off Platts head for a corner which saw County`s number 7 in action again clearing Hicks shot off the line!
There was time for a decent County move to be wasted ,and a shot from Dennis to drift just wide , before County took the suicide route once again via Tunnicliffe , who is proving a master in this regard. The move started with Hicks, but seemed to have been sorted when his cross headed for Ormson, but for some reason  Tunnicliffe, faced with a ring of red/black shirts some yards away, elected to make it his, compounding the felony by then passing the ball to the opposition rather than wellying it into the middle distance.In a flash Taafe had it and it another it was 2-1 to Histon as he had lashed it home. Simply too gruesome a happening for me to comment on any further!
Tunnicliffe did try to make ammends following  a break from deep by Platt but haste got the better of precision and his shot left the ground with some to spare.
County did much of the attacking in the last 7 or 8 minutes that remained ,but it mattered not.....the damage was done, and try as they might they were not going to get that equaliser,and the game ended  disappointingly with the blues pointless.
The Flyer made excellent time on the way back which was good but hardly adequate compensation for what had gone before.
Will I be back for more though.......yes of course and, I guess so will you!