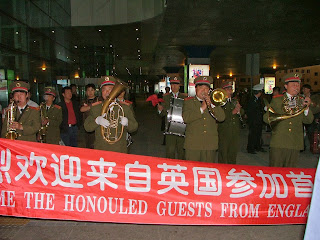 Wonderful welcome in early hours
upon arrival in Beijing.

A traumatic 2003/4 season had just concluded, and County`s team, managed by Sammy McIlroy, headed for China and County`s second tour of the country.
A four match schedule lay ahead of them( this was to change with dramatic effect later, when more games were added)and much off the field activity as the tour was organised in conjunction with a `British Week' , so the first part of the tour saw a host of British civil servants and businessmen accompanying the team ....oh....and 8 fans who had all paid £1500 for the pleasure of seeing their team tested in unfamiliar surroundings.
Within 24 hours of landing in Beijing( and taking another flight to Shenyang)  County had a game on their hands against top Brazilian side San Paulo at the Sha Shan National Stadium.
Here`s how it went........

County's tour of China opened with a game against Brazilian outfit San Paulo in the blazing sunshine of the Chinese National Stadium. On a rock hard pitch County struggled to put their game together against a tricky Brazilian outfit, but this was hardly surprising as County were less than 18 hours off the plane from Stockport!
Playing the. ball around casually the South Americans established dominance early on to such an extent that County's first attack of any note came in the sixteenth minute.
Unfortunately for County the Brazilians had opened the scoring one minute earlier.
Spencer did his level best to keep the ball out but his parry was mercilessly fired home by Rodriguess from close range. 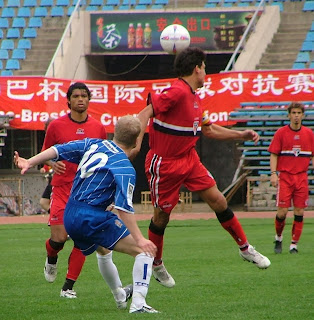 Byrne gets stuck into the Brazilians!

As the first half progressed so County managed to get a better input on matters but the San Paulo side were still in the box seat.
Despite this Mc Lachlan managed to set up Byrne for a shot on goal with time fading that although passing outside the goal gave the diving keeper some anxiety.
The starting line up for the Hatters was very much one that gave the younger element in the County ranks a run out.
In at the start were young tyro's Meadowcroft, Byrne and youth team ace Adam le Fondre.
There were no changes at the re start as the crowd of 1021 greeted the players on their return to the field.
Early into the 2nd period Le Fondre had a chance but  overall it was the Brazilians in control.
Zhangh came on for County after 52 minutes for a long awaited debut. The change did not stop the flow of things and uncertainty in the County back line saw a 2nd Rodrigues strike give Spencer no chance at all.
Shortly after McAlister replaced Meadowcoft but this did not help matters as within seconds Maguire had the ball hurtling into the net under Spencer's diving frame.
Mcilroy came on with 71 minutes gone for his County debut at the age of 49 and Damian Allen, a real prospect , took to the field taking Le Fondre's place. 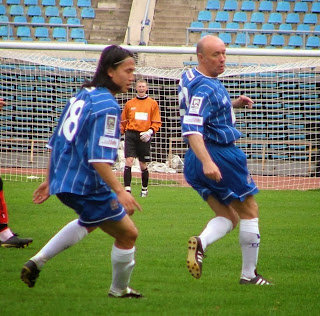 
There was only pride to play for now and it was a real bummer when Goodwin elected to ignore Byrne`s entreaties to take a spot kick awarded for a blatant foul by the San Paula keeper and took it himself-he over finessed it onto the bar and we all groaned.
With time running out County received their reward as a Morrison centre was met decisively by the head of McLachlan and the arrears were reduced
The whistle went and the young County team were vanquished but unbowed as they turned to acknowledge the travelling band of Hatters high up in the massive stadium.
Next off will be a different story-no jet lag, and the first team regulars will be more in evidence then-trust me