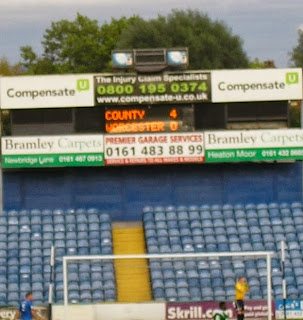 Circa 17.35 tonight, I peered through my front room window to see a ball bounce by onto Range Road, followed almost immediately by two young lads both wearing current County away shirts. It was not a sight that I have seen a lot of recently, but good to see nonetheless, and probably not unrelated to what had just gone on at EP where County gave us the equally unaccustomed sight of them dominating a game completely from whistle to whistle  before running out 4-0 winners. It`s true to say that Worcester City, their opposition, looked a very ......very poor side indeed today, but we badly needed a win, of any type, notwithstanding the quality of the opposition, and County gave us that with knobs on ,clinching the County hot seat for Alan Lord in the process, with an exhilarating display of football.
It was a fine performance from the off as everyone harried and chased anyone in green- the result being total domination and a flurry of excellent goals that had the Edgeley Park faithful purring with contentment come the final whistle.
Tunji Moses walked off with the M.O.M award which rather mystified me, as a whole host of others played better than him, in my opinion......Jevons who gave us two terrific goals and a game long exhibition of precision passing......Gosset who chased, harried and generally got in the face of anything that moved- not long before he`s off back to whence he came I guess, and good luck to him! Then there was Jacobs who chipped in with another fine goal, the first of the game that set the ball rolling for the blues......Turner who was a constant threat used on this occasion as a central striker........Howard who was busy from the off to the games last gasp- only a decent  finish was missing from his game today. And then there was Duxbury who had another outstanding game –his pin point passing a constant feature for County- to say he looked the part , is to grossly under state the facts- he`s a massive find! Any one of them could have got M.O.M , but it matters not that it went elsewhere, when the quality of the overall performance was so high and the result so deservingly excellent! 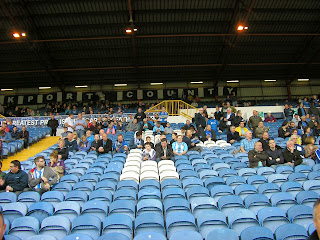 
Injury and illness rather dictated AL `s choice of starters – Moke and Dennis were still injured whilst others were absent for a mix of reasons, as County faced up to the game against a side 2 points and several positions above them in the table.
The sun shone brightly as the teams took the field – amongst them was Jose Veiga, the Dragons keeper, and( I could be wrong) he appeared to be wearing a Stockport County Supporters Cooperative high viz top- it was a stunner....a real must for any fashion monster in our midst! 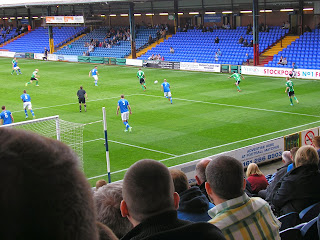 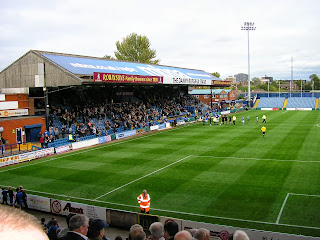 County go in at the break to an ovation!

This was altogether better than anything that had previously been served up to us this season- it was just a case now of could County build on that 3 goal first half and extend their lead?
County opened the half on the attack, but Worcester seemed at least to be trying to respond and mount a counter attack, but they were making little headway against a County side that was on its guard....on its toes and its metal!
That said, nothing much passed for 5 or 6 minutes until another Jevons gem set Gosset up and he turned to fire a snorter in that only just missed out!
A header from Munday from  a Glover cross then gave Ormson his first real bit of work to do- it would be a considerable leap of the imagination to describe it as a save, but it was maybe a statement of City`s intent to at least try and make a game of it!
No sooner had County swept forward on another attacking spree, allowing me to dismiss the thought of a City rally, when County lost the ball forcing Ormson to make a fine last gasp save to deny Nti as he blazed a shot goal ward, following a foul up involving Charnock and Jacobs.
This seemed momentarily to stiffen  City`s resolve and Charnock  was glad to concede a corner ,which saw Geohaghon go close, and Nti closer still before he was flagged offside much to County`s relief.
County needed to do something to quell this mini rebellion, but for 5 minutes or so there was no sign of this materialising.......until ........almost on the hour Turner picked out Jevons as he lurked in the box midst a mangle of assorted bodies. It was not a chance.......nothing like one......but Jevons did not know that and he promptly curled a superb strike past the dazed keeper into the net. It was 4-0 and County were now well set to win!
A double change of O`Halloran for Duxbury and Platt for Lofthouse , brought fresh legs onto the scene for the blues who continued to dominate, and Veiga did very well to dart out of the box to head clear with Turner threatening .
Worcester kept trying in response but their forwards lacked power and completely failed to even get close to testing Ormson.
A series of corners pinned Worcester back in their last third, as County profited from some borderline brilliance from Gosset . Windsor, who came on shortly after for Gosset, went close with a decent shot, with just 10 minutes left. 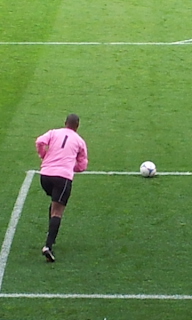 This went on for a while with the game seemingly meandering to a pleasant conclusion, whilst disturbing absolutely no one`s sleep, when Worcester decided they needed that goal....that consolation goal!
Glover initiated what looked like a last ditch raid, but when Nti`s shot was deflected for a corner and County struggled to clear their lines – it was not that much of a surprise when a hand to ball moment allowed the referee to point to the spot and give the visitors a chance to get that consolation goal they so desired!
This was irritating to say the least...................4-1 was nowhere near as impressive as 4-0.....and whoever took it would surely bury it, except City then staged their very own mini `Prize Fighter` event to decide who took it, and....having won that privilege, Glover promptly slammed the ball way beyond Ormson`s dive, but also way over the bar- last seen heading for Greek Street and quite definitely the worst penalty kick I can recall seeing!
Howard tested Veiga with a stinging shot and Turner delighted us with a mazy run past several into the box after that, but it stayed at 4-0 and again there was no one I could see who was remotely disappointed with that! 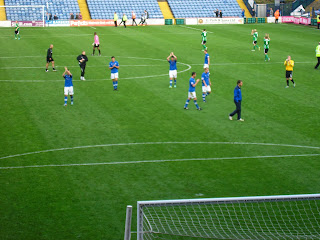 Great stuff County.
Here`s to more of the same at Barrow on Tuesday.