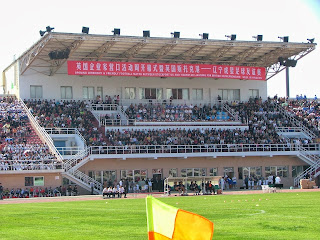 
After the first game, so soon after arriving in China, County had 2 days before their next match, against sister Club Laioning Tiger Star- 2 days filled with meetings with government officials....receptions.....fantastic banquets and about 5 minutes sleep.
So....on 13 May, it was off to Yingkou for the Stockport party, who were greeted by a capacity crowd of 22000 in the picturesque stadium, in contrast to the small crowd that pitched up at the National Stadium . 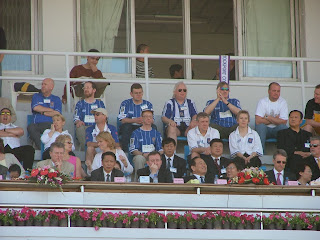 The sun blazed mercilessly down on a crowd of 22000 at the excellently appointed stadium in Yingkou, as County, watched by a TV audience of many millions, romped to a convincing victory that sent their small band of supporters on their way happy.
A much stronger side than the one that took the field against San Paulo was on duty today and they ruthlessly set about emphasising the gulf in class that existed between County and the fledgling Chinese side.
Despite a couple of early scares County took the lead early doors as Chris Williams tricked his way down the right wing to force a corner.
Morrison took it and Jones met it at the far post with a firm downward header that gave the keeper no chance and County the lead. Morrison was provider again seconds later but this time Beckett's header from the Irishman's cross came back off the bar.
For Tiger Star it was a case of relying on the long ball out of hard pressed defence but the pressure from County was relentless and it was no surprise when Jon Daly slipped through a sleeping Tiger Star back line to slide the ball coolly home for the 2nd goal.
After the break, during which Vernon Bear kept the crowd hugely entertained, County rang the changes with Byrne, Allen & Meadowcroft replacing Goodwin, Jones & Beckett.
The pattern however was the same and Lambert could have scored twice had he had his shooting boots with him 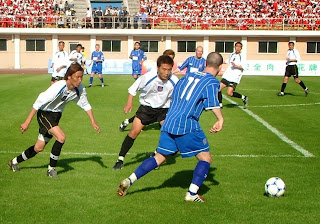 Morrison on the ball.

Daly meanwhile actually did have the required footwear in his possession and when Morrison fed him an inch perfect pass the neat lob that followed left the keeper helpless as the ball hit the net.
Daly headed home shortly after from another Morrison cross only for the ref to rule it out for, well anyone that can tell me please do so!
Mcllroy, Zhang, McAllister, La Fondre, Byrne and Coppinger all came on for late cameos but not before the lively Morrison increased the Chinese discomfort with a drive from out left following much graft by Daly.
Tiger Star tried to peg one back but never really looked capable of doing so as County once again saluted their small group of fans at the end of a satisfactory victory.
Man of the match?...... well take your pick of Morrison or Daly and take due note of the good work done by youngsters Meadowcroft and Allen . 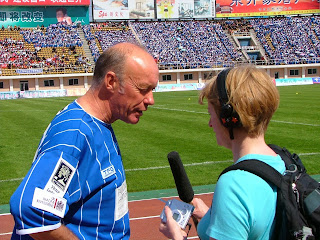