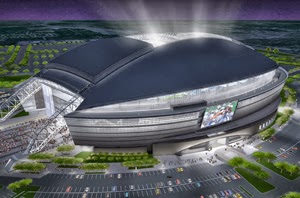 The massed crowds strained at the barriers to get a glimpse of the 70 year old but none the less sprightly King George and his life partner Queen Gary accompanied by the beautiful surrogate Princesses Balbinda and Latifa. Although hugely oversubscribed – tickets had gone on sale at a conservative £950 each although it was rumoured that they were illegally exchanging hands for over £8000 apiece.

Beyond the estimated 160,000 crowd at the apex of and the huge stadium dwarfed all around it. Crowds of this magnitude had not been witnessed here since the old airshows that took place during the last century. The locals had raised major objections to a 120,000 all seater covered (retractable) stadium being built next to this idyllic part of the borough once known as the revolutionary retracting design meant that aside from match days the entire structure and the adjacent parking areas fully retracted out of sight into the ground.  The old runway that had been abandoned back in the second decade of the century was once again fully operational and today played host to the multiple Airbus 830 1000 seater silent supersonic aircraft that had brought many of the huge crowds to this edge of the city of . Pride of place within the aircraft stands however belonged to the clubs very own supersonic Gulfstream 7000 35 seater jet. As the bright sunlight glinted off the streamlined fuselage picking out the bright blue lettering ‘Animo et Fide’ ’ Nowhere on the entire planet was more than 11 hours away with this machine.

This new dawn, this celebration of success over adversity had not seemed remotely possible during the early part of the century. After some moderate success the club had nose dived out of the League Football, a succession of disastrous decisions and disastrous owners had all but, by the second decade of the century killed the club.  When the future of the club was looking distinctly unsafe a group of Far Eastern businessmen () had taken a gamble not forgetting their links with the club in happier times less than a dozen or so years before and purchased the club. Progress initially was slow but steadily the club was able turn decline into progress and by 2018 it had regained its place back in the football league.  By 2025 it had managed its way for the first time in its history into the top tier of English football and the first of its 17 FA Cups the year after. European success followed and the club achieved the first of its record breaking 24 Champions League successes in 2029. During this period of success the old stadium had initially been uprated into a 40,000 all seater stadium by being able to buy up adjacent housing and land. After their historic quadruple winning year of 2033 when they won the title, the FA Cup, the Champions League and the all important World Club Cup a further 25,000 increase was squeezed in after substantial development work and although the present capacity is 70,000 it became necessary to consider a history making move from the clubs long standing and spiritual home.

As the clubs meteoric rise in fortune came about that contrasted sharply with that of our close and for many years our massive (in every way) neighbours Manchester United and . As the American debt crisis deepened and as that once great country lost its superpower status to and eventually , American business imploded: the dollar lost most of its value and American businesses collapsed en mass almost overnight. American owned football clubs particularly highly leveraged and indebted ones were decimated.  Middle Eastern owned clubs faired no better. As oil extraction forecasts had predicted, the stuff was running out and although it was reckoned there was enough in the ground to last until the end of the 21st century the world had long ago switched to new bio fuels and hydrogen fuel cell use.  Thankfully both clubs did survive although they share a small 4000 seat stadium in the area once known as Longsight. Liverpool no longer play in the and are a franchise team plying their trade in the Indian 3rd division. The death knell for other clubs that did not survive like Arsenal and Aston Villa came about when the old SKY sports sponsorship of top flight football ended in 2029. That coupled with the American economic crisis and the end of the oil boom in the finished many more clubs. As I write who have been Russian owned for nearly a century teeters on the brink due to the oil/gas industry in coming to the end of its natural life. They currently play in the 2nd Division although they are not expected to finish the season.

Outlined by the cloudless sky a small speck appeared, it grew larger and soon revealed its true shape as one of the new breed of business helicopters.


This one happened to be carrying the British Prime Minister. Prime Minister Lin Po was a hugely popular figure, she had almost single handedly united a nation nearly torn apart when all administrative  governmental power had been handed over to Beijing and New Delhi some 10 years earlier. Although now a largely a ceremonial post the 1st Minister had been invited by the owners to open the new stadium with King George, Queen Gary and a surprise mystery guest.

The stadium had now filled to capacity. To cater for those who could not get a ticket huge monitors had been erected, not just within the confines of the stadium car parks but all across Stockport City including the old long abandoned gas fracking suburbs of Offerton, Bredbury and Marple where small populations still remained pending the construction of the worlds largest ever shopping ‘experience’ 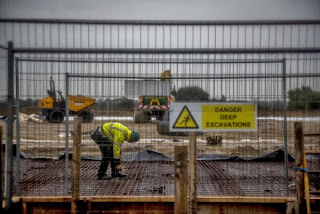 “It gives me tremendous pleasure” King George started, Princess Latifa giggled, “It gives me tremendous pleasure to be with you all here today at this historic site where this country once produced legendary aeroplanes such as the Lancaster and the Vulcan” “Today however is not about looking back, it is about looking forward” “This stadium is the worlds most advanced sports ground, it has created many jobs” Prime Minister Po beamed with delight. “And represents what we can achieve together” The owners grinned. “However it would be quite wrong for me or even our wonderful Prime Minister to open this stadium and begin celebrations to mark Stockport County’s 200th anniversary” The crowd cheered, King George let the moment pass with good humour and raised his hands “As you may know our hosts and club owners spared no little effort to find this wonderful football clubs oldest living supporter” he paused “well they finally did, would you please welcome and be upstanding for Arthur. Br ……….. “  The crowd roared in unison.

The old man raised himself slowly and the microphone was gently placed in front of him. “ Even though we are going to keep it as our reserve teams stadium I’m going to miss Edgeley Park”  The crowd laughed “ But this is fantastic” he uttered surveying the magnificence of the surroundings. I’m not going to go on about our history both good and bad” “ I think most of you know it by now”  “ but if Danny Bergara, Brendan Ellwood, the players Francis, Angel, Armstrong Flynn to name but a few and countless others from those days were alive to see this I don’t think that they would believe it” “ I’m also so glad that when we received our city status we did not change to Stockport City that would have been awful” the massive crowd concurred He paused to blow his nose and to try and stifle his rising emotions “ All that remains is for me along with King George, Queen Gary and Prime Minister Po is to declare this stadium open and for today’s celebratory game against our fierce rivals Barcelona to take place” With that he leaned forward and pressed a button on a small plinth that a pretty Chinese lady had placed in front of him. The giant state of the art scoreboard lit up: welcome to the ‘Bergara Tiger Star’ stadium.