(All images  provided by hedgegrower)

A very decent pre-season crowd, warmed up nicely , in borderline disgusting weather, by County`s Family Fun Day pre-match, were treated to  a cracking game between 2 sides who wanted to win and could play a bit today at Edgeley Park.

That label certainly fitted Fleetwood well as, driven on by top notch play from Cian Hayes, Chris Conn- Clarke and Barry Baggley ,they put on as good a second half showing as you would wish to see if you wanted your own side to get a genuine test, and this was definitely one of those.

County responded well though and they had to in a second half that saw the visitors take the lead 3 times with some neat football. Top performers for the blues ,in my view, were Ryan Rydel who gave 90 odd minutes of lively work out wide on the left. Madden was in impressive form too, netting the coolest of penalties and a smartly taken second.

Fish got the nod for the M.O.M from the sponsors, and he did look solid, so I will not argue too much on that one!

Back at 3 o`clock County kicked off with Hogan on the left side of a 3 that had Palmer central and Fish on the right, and this pairing came under pressure quickly, but whilst the young Fleetwood forwards looked lively and showed much skill, my early impression was that they lacked a touch of lethality at the sharp end.

The early moments saw County push on too, and in this regard it was good to see Southam- Hales retaining the obvious appetite for action shown last season , but his surging run and a corner won by Reid came to nothing.

The eighth minute saw Rydel latch onto a neat long ball from Hogan before swinging a dangerous ball goal ward. Reid was almost onto it, but the ball eluded him.

It was almost another 10 minutes before anything else of note occurred and it stemmed from good work from Reid who stole the ball impishly before threading it into Quigley`s path. Quigley was off and heading for goal, but alas the resultant shot flew barely an inch beyond the keepers left hand post!

It went on ..Quigley close again….Rydel closer, but a corner was County`s sole reward and Rydel`s delivery was poor from this so it stayed 0-0.

A dangerous run from Conn-Clarke was snuffed out by Southam- Hales , setting a counter attack up involving Rydel for County . Another dangerous cross won us another corner, but again nothing came of it!

If County`s inability to make use of set pieces was a worry, it was probably an anxiety not unknown to Stephen Craney the visitors manager, as after Hogan had clattered Baggley comprehensively ushering in a tasty free kick on the edge of County`s box, this was cleared easily by County`s defence, who were looking increasingly confident.

This confidence saw Quigley on a run through the middle on 33 minutes. He had Sam Bird for company and the defender`s tackle sent Quiggers to earth. I thought it might have been worth a free kick, but Referee Christian Silcock thought otherwise, and over all he handled the game well I thought.

It went end to end after that last action…..Lane failing to capitalise properly on a slip by Hogan for Town , and County disappointing at the other end by wasting another corner after a Reid shot had ricocheted onto the roof of the net off Bird.

The half ended with a Quigley shot drifting inches wide, and a series of County corners being met by resolute defending from Darnell Jackson and his team mates.

A couple of photos . The first of a group of youngsters , just one of many such groupings that must have enjoyed today... 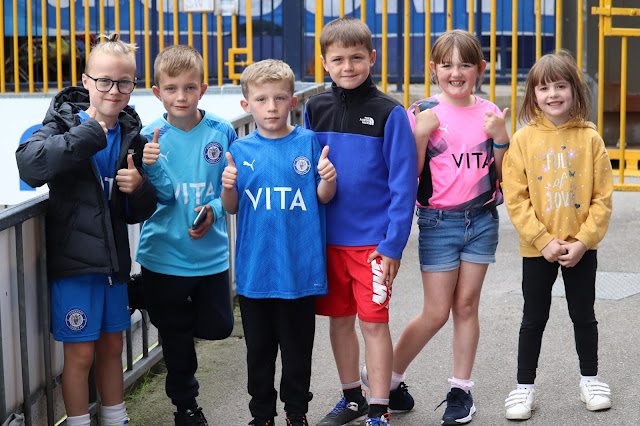 And it was good to see the flags back again today:- 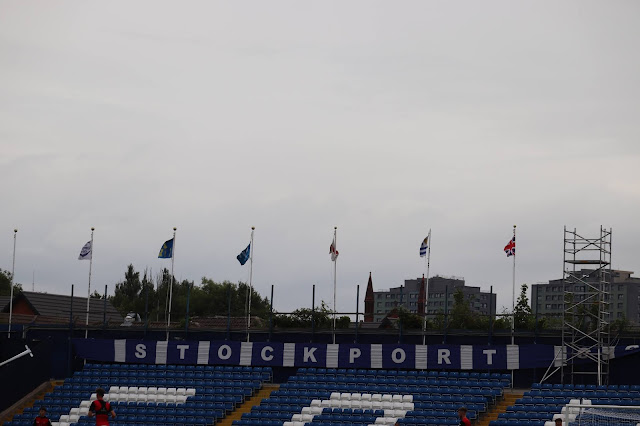 County went on the attack straight off from the re-start, but again could do nothing with a corner .

Fleetwood replied but repeated the blues failing by wasting the flag kick.

End of issues then…except it wasn`t and Ross ( on for Hinchliffe after the break) did well to keep Baggley`s shot out with his legs .We needed County to be tight for the resultant corner but suddenly the fox was inside the chicken run and Baggleys` chip beat Ross by a distance to make it 0-1.

That was a shock, but solace was not long in coming via Rydel who ran the ball into the box before being upended by Johnson.

The Referee wasted little time in pointing to the spot, and the sweetest of kicks from Madden did the rest- it was 1-1 and within a couple of minutes of Town scoring!

I was still telling myself that ` good teams equalise quickly after setbacks` when another set back came our way, and within 2 minutes again.

County were under the cosh with Palmer doing well to thwart Baggley, but Town would not go away, scoring again through Conn-Clarke – a really neat finish!

There was a rash of substitutions from County after this with Walker, Collar and Whitfield coming on for Palmer, Southam- Hales and Reid, and a rash of attacking play from County with Rooney and Walker unlucky with lively efforts just after the hour mark.

The fresh legs looked to have had a good effect on County`s play particularly down the left where Whitfield was supplementing Rydel`s work nicely.

It was a corner won by Whitfield that saw County equalise again, and it was a belter as Collar won the battle to head the ball home which he did to acclaim!

It was 2-2 and quite a match really, as Quigley went close a couple of times, but Fleetwood were going nowhere, they still wanted this one and Ross did well to save from Baggley with 20 minutes left.

Then the visitors` application paid off again as their pressure ended with Fish fouling Baggley in the box. It was another penalty and the Town number 10 got to his feet to make it 2-3 with a cool kick!

County redoubled efforts to get back into it again and Rydel`s crosses were looking tasty, but Croasdale could only head the ball over the bar on 75 minutes.

It took County another 3 minutes to square this circle, and it came from a throw down our right that the blues quickly lifted into the box where Madden`s dive saw his header make it 3-3!

That was amazing, and Madden wanted a third goal, only to see a further header narrowly miss out a minute or so later.

County kept it up…Quigley thwarted by a neat save from Town keeper Luc Rees, then blocked at the last gasp moments later by Johnson.

We were heading for the final minutes and still it was anyone`s game.

Still Town showed us they wanted it, but Lane`s surging disconcerting run ended with him shooting straight into Ross`s arms.

Hayes came at County next, but a late deflection eased County`s pain as did a Hogan headed clearance from the corner that followed.

The pressure continued on the blues, but they continued to defend with determination and seek to hit back on the break, and Rydel was still proving to be a useful foil in this regard.

County made a decent fist of the closing minutes with Rooney kept out by a brilliant save by Rees, and Walker close as well close to the end.

It had been a bit of a cracker( the second half anyway), and 3-3 was a fitting end result to the game which drew a warm burst of applause , on a miserable day, from a good sized crowd.

I cannot think of anyone I would not say `well done` to on either team about this game, as friendly games go this was just what County needed, let`s hope they can now build on that foundation.

Subs not used: Trialists A, B and C