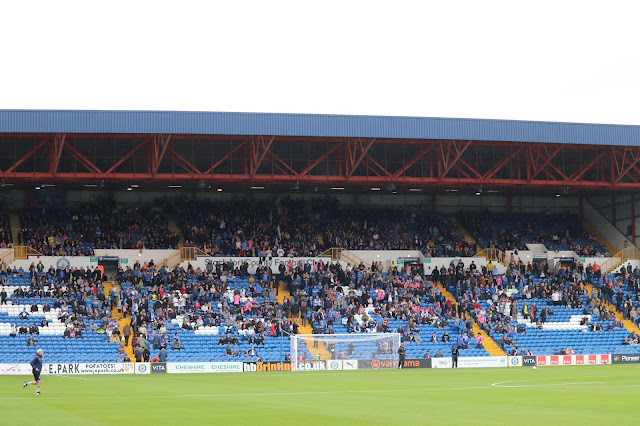 County flattered to deceive today as a packed Edgeley Park sat back thrilled at the sight of a peach of a goal fashioned by Madden and put away expertly by Rooney with just 10 minutes gone.

I looked for signs that Daggers could produce something akin to the almost irresistible showing they exhibited late last season here, but couldn`t see any- they were neat but that was all.

Then they started to stir perceptively wracking up a clutch of corners that had Hinchliffe on his toes.

Despite the pressure, County looked to be weathering the gathering storm , and then they weren`t and it was down to Hogan whose hand to ball moment  on 40 minutes teed up an inviting morsel for Wright who obliged Daggers with a superb free kick to equalise the scores.

Matters got worse after the break as County leaked 2 more goals to a Daggers side who by that stage were winning corners at will.

I looked for something…anything coming back from County especially our midfield, but they were being bossed comprehensively as Daggers proceeded to take County`s defence apart- but for Hinchliffe it might have been much worse!

Back at 3 o`clock, despite constant drizzle in the air, there was also a distinct feeling of optimism about as the game got underway with County kicking towards the Railway End.

It was 4 minutes before anything of note occurred and it involved Madden whose darting run ended with his snap-shot being deflected for a corner, but Mc Callum headed this clear with some ease.

County pressed for 3 or 4 minutes, but without ever hinting that they could nick one.

Then they did …and it was a belter as Madden turned his man with sublime ease before slotting a neat ball into Rooney`s path. The finish from Rooney was commensurate with the excellence of the pass from Madden, and County had the lead with less than 10 minutes gone.

And Andrew Machin got a neat one of that goal :-

Madden went close 2 minutes later but was unable to turn Southam Hales` cross into a second goal stretching at the back post.

Not much of note happened in the next 5 minutes, and then McCallum went close for Daggers. County were very nearly architects of their own undoing through their failure to clear their lines, and it was only a fingertip save by Hinchliffe that kept the ball out of County`s net. The corner that followed was poor, so the blues survived.

Back came County through Southam- Hales, but Elliott Johnson blocked the effort and the subsequent corner again disappointed.

The next action was at the Cheadle End, where Mauro Vilhette made a wakes of a shot sending the ball soaring off high into the stand.

Having not been too impressed at the Daggers earlier, they were beginning to set about changing my mind- Collar doing well to stop Vilhette moments later, but unable to prevent a  follow up shot from the same player that was deflected for a corner.

Southam – Hales cleared that flag kick, but the pressure continued to mount on County – they somehow kept Angelo Balanta at bay as he headed for goal, but at the expense of another corner which saw Hinchliffe punching clear under pressure. Two more corners came and went without addition to the score, but the pressure was definitely on County now, lucky perhaps to see Balanta`s next shot miss out with the goal gaping.

That was 37 minutes, could County reach the break intact?

Well….no….as Hogan handled the ball under pressure thus teeing up the tastiest of free kick`s nicely central and on the edge of County`s box.

It looked scoreable and was as Wright slotted the coolest of kicks beyond Hinchliffe into the net.

The 200 or so Daggers fans who had made the trip had the reward their dedication to supporting their team deserved, and we needed to do something to quieten the noise in the Away Block.

And Andrew Machin`s view of the travelling Daggers....

Madden did his best a minute later being foiled by keeper Elliot Justham.

County ended the half with a flurry of action at the sharp end, but as the teams trooped in it was the away end that was applauding loudest and it was beginning to look like Daggers had our measure!

That said, handbags were out on the visitors bench shortly after which ended with Daryl McMahon being booked. The small bru-ha-ha that followed took an age to work through and almost inevitably the free kick that followed from County flew tamely wide.

That was 54 minutes, and McMahon had recovered his equilibrium sufficiently now to initiate a change in personnel that saw Balanta replaced by Josh Walker, and within 2 minutes of the switch it paid off!

County were attacking and then they weren`t as Madden went to ground, the ball heading off deep into County territory. In a flash Mc Callum moved it on to Josh Walker and he made no mistake with a neat finish giving the visitors the lead!

That small disaster was still being digested when another hit us via an ill defended corner from Wright that was headed home by Robinson. Where were the defenders? But more to the point where was the midfield?!

This situation prompted action by Simon Rusk who brought Rydel on for Walker and Reid for Collar.

I was pleased that Reid was on but dismayed that he did not start particularly in the absence of Quigley. Reid scored 17 goals last term in the league ( second only to Tshimanga on 19) – he scores goals ….play him!

There were no further calamities for the next 4 or 5 minutes, although but for Hinchliffe there might have been, County`s number one made a fine save to deny Sagaf who had just filleted the remnants of County`s cover en route goal.

It went on….pressure and more pressure at the wrong end, Hinchliffe again performing miracles tipping McCallum`s shot over the bar at the very last gasp!  Not to be denied easily, McCallum met the incoming corner only for the glancing header to fly wide.

There was no respite for County. Johnson was just kept out from the second of two corners for Daggers and eventually relief came in the form of a County throw.

Newby was on for Fish with 15 minutes or so left, but some County fans were clearly distracted as a beach ball made its first appearance on the pitch.

And the beachball caught by Andrew Machin :- 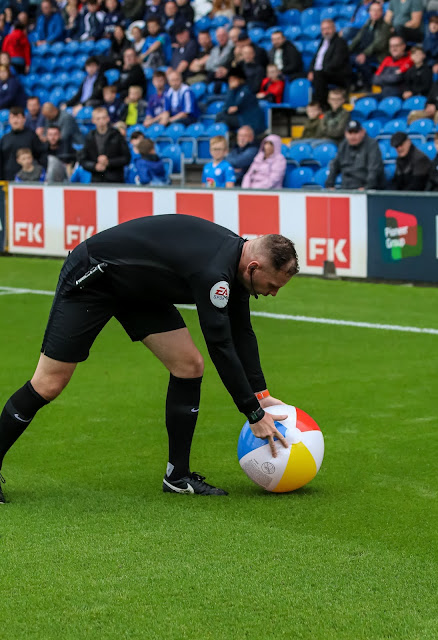 County were trying to mount counter attacks – Southam -Hales pinging crosses in from the right but with scant reward.

Reid and Newby did fashion a break on 82 minutes. Reid got on the end of it too, but was blocked as was Barclay`s follow up.

It was at this point that fans started drifting towards the exits, to the sound of a verse or two of `Jimmy Gannon`s Blue & White Army ` from the   Cheadle End Upper Tiers which were packed!

The match was still on and in earnest too as Hinchliffe again saved County`s bacon as Barclay lost the ball to Josh Walker. That was the umpteenth save from Ben and just why he did not get M.o.M is a small mystery!

Back came County though as I looked up to see Rooney`s snap shot just carry the bar.

Rooney was in the action again next his corner forcing Robinson to head behind under the cosh. Sadly Rooney`s second corner was poor in comparison curling out disappointingly.

The last minutes including 6 added minutes saw County trying to rescue something from the games wreckage- Rydel went close…corners were won  putting more pressure on the Daggers back line, but overall the visitors knew they had done enough to win, and there can be no argument for me that they thoroughly deserved  their success today.

So, on the way home my feeling of disgruntlement was assuaged  somewhat with the thought of something I had been gifted today. The football equivalent of the executive`s therapeutic toy. 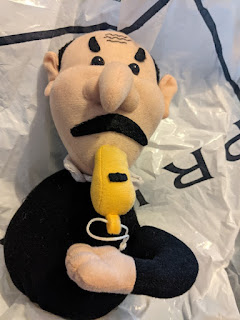 It`s a belter…..it`s a referee in traditional black and white , but  the added attraction and therapeutic element comes with the fact that you can pull the effigy apart slowly and with a growing feeling of calm  enveloping you. You can of course put it back together again thus enabling another `session` when the need arises.

Without a doubt my best present ever!

Here`s to an improvement next week at Southend !