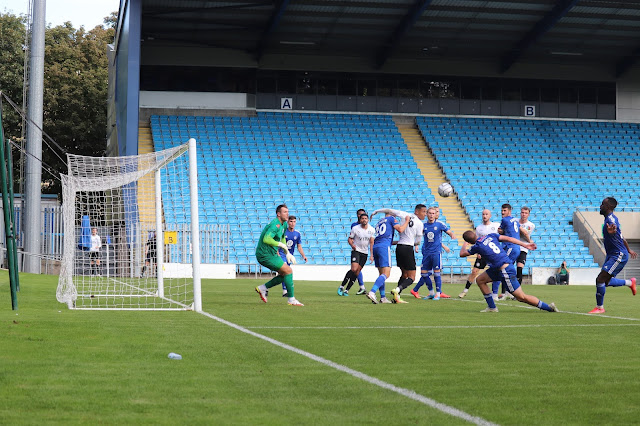 There was a period this afternoon when I thought something special might be on the cards.

It was a few minutes before kick-off and for an hour or more County fans, who came in impressive numbers, had been running through their collection of traditional County favourites- I could see the locals were impressed….I was ….the team was…..and all looked set if only………………..

Then the game started, and the optimism slowly melted away with the passing minutes.

It should not really have been much of a surprise to find that Peter Wild`s Halifax side were going to prove a sterner test than had Maidenhead on Tuesday, but for 40 minutes the illusion of parity and the promise of riches to come prevailed.

The game up until that point had been nothing special, both teams probing for openings without success.

Then an all too familiar occurrence re-set the way of it as Hogan`s ill discipline saw him gift County`s opponents a free kick smack in front.

County held out at 0-1 for the remainder of the half, but with Warburton and Spence increasing in influence for Town as the minutes ticked away after the break it was no surprise when our hosts added two more late on to claim a well merited 3-0 win.

The opening minutes were forgettable with Halifax first onto the front foot, County replying when they could largely via Kitching and Southam- Hales down the flanks, but neither keeper looked in any real difficulties throughout.

County perked up 10 minutes in, and Collar was inches away from an opener after a free kick following a foul on Reid.

But already a game long pattern was emerging in that County would waste their set pieces, and they did so again 2 or 3 minutes later, being indebted to Collar`s alertness in cutting ex Hatter Gilmour out as he looked set to make us pay on the break for messing up the set piece.

That said, Rooney went close on 16 minutes, and I was moved to write the legend ` County are beginning to warm up`- thank goodness nobody reads my notes! 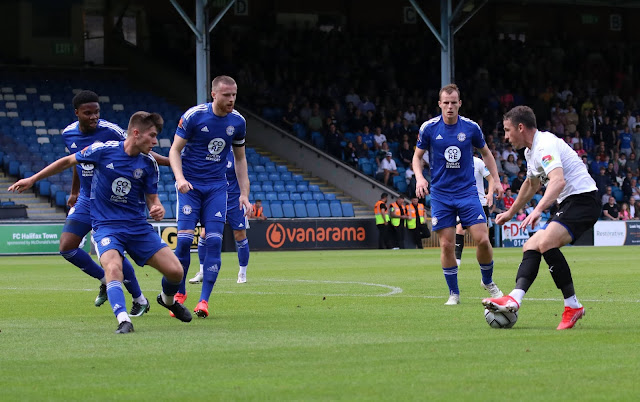 Warmed up or not, keeper Sam Johnson beat Reid to a high one shortly after.

......... Kieran Green did the murky deed 18 minutes in. Madden saw a shot blocked, and Kitchen found the route to goal blocked by Warren on the end of Reid`s pass from the kick- that was much better from County!

We needed more of the same, but instead we had to defend a free kick which thankfully County did well, Barclay running it clear. Reid sent Southam- Hales in again from this , only to see Hogan head over the top from the resultant corner.

For Town, the flow, when there was one, seemed to go through Spence who had the orchestrators baton in the middle of the park, not far away from Warburton who was on the lookout for anything loose.

County meanwhile pressed again winning a rack of corners but achieving nothing with any of them.

I`ll really have to stop lifting my mental jottings from my notes as I now found myself offering the priceless epistle “ already looks like a 0-0”-it did it did !

The 37th minute had me on the edge of my seat though as, under pressure from Reid, Maher slammed the ball against the Town crossbar. The corner brought only anti-climax however as Johnson did the biz, catching the ball with alarming comfort.

This seemed to perk County up a touch, Reid sending Southam- Hales clear with a probing ball, only to see the same Maher in place to see the ball drift harmlessly out.

We were into the last 5 minutes of the first half now, and Halifax were again looking to stir County`s pot, but were stuck at the edge of the white shirted blue`s box, until Hogan fouled his man and they weren`t.

Ridiculously we had gifted Town a free kick in a central position on the edge of the box- Warburton territory!

Up he stepped and it was 1-0 to Halifax as the ball was put away expertly by our former player!

That was hugely disappointing!

County tried their best in what remained of the half….Reid went close…Southam- Hales won a corner but Johnson did the biz again from this beating Fryers to the ball in the crowded box.

Some crowd shots starting off with some from hedgegrower:- 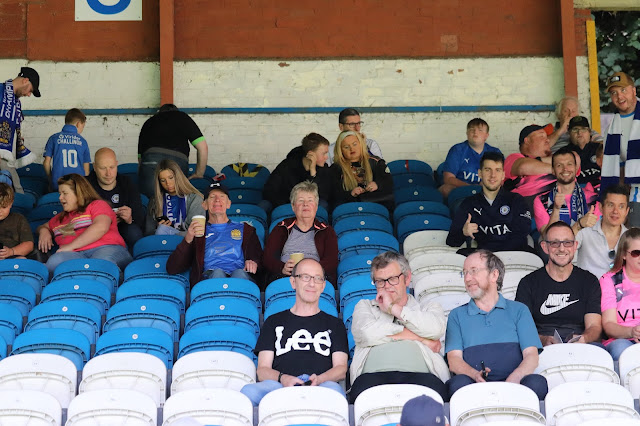 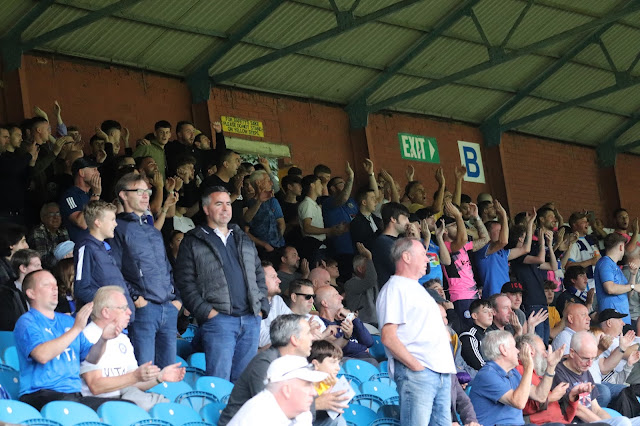 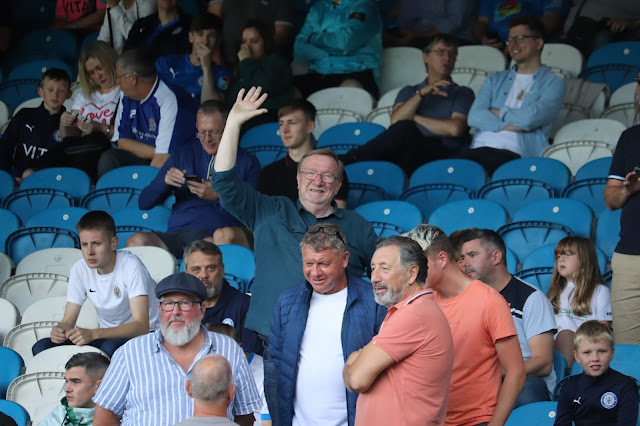 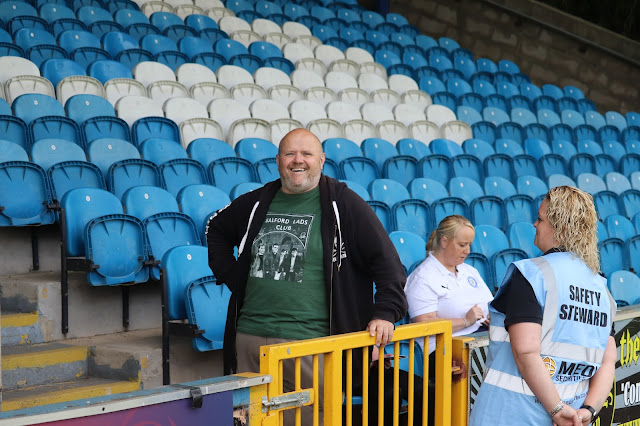 And some quality shots from Andrew Machin :- 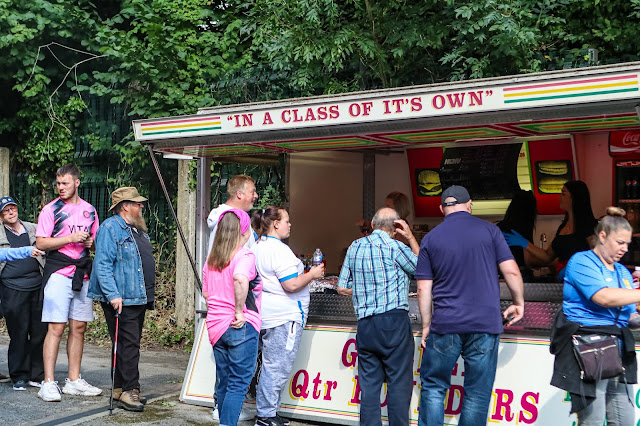 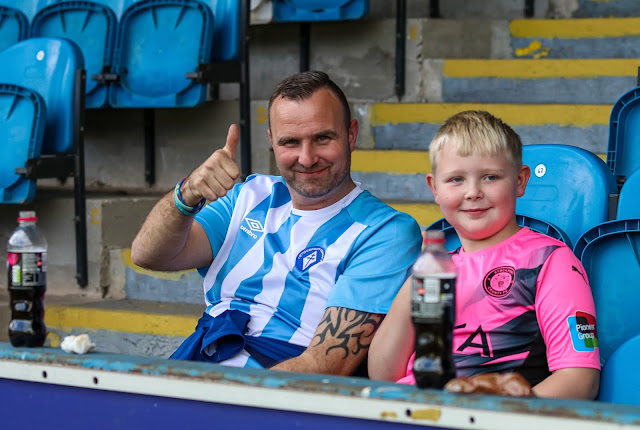 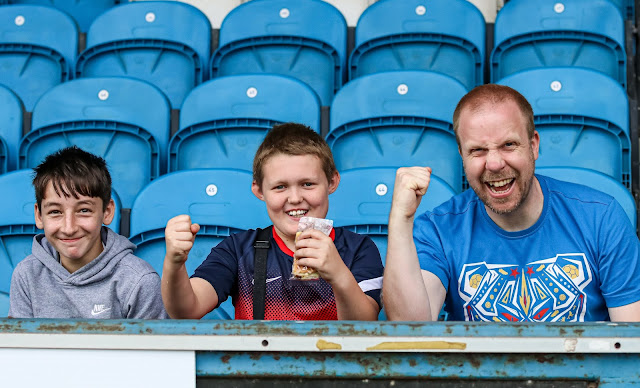 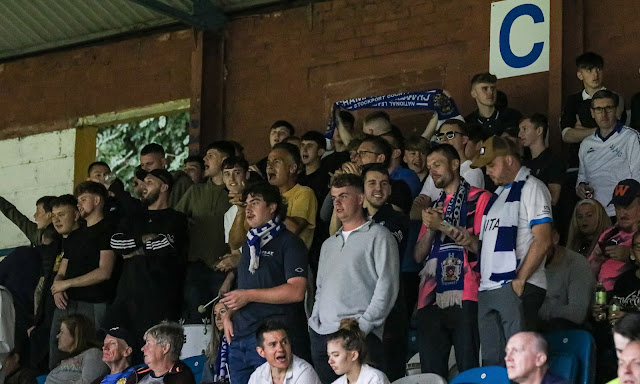 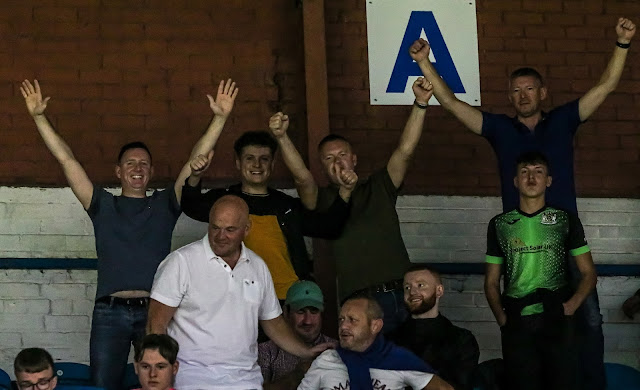 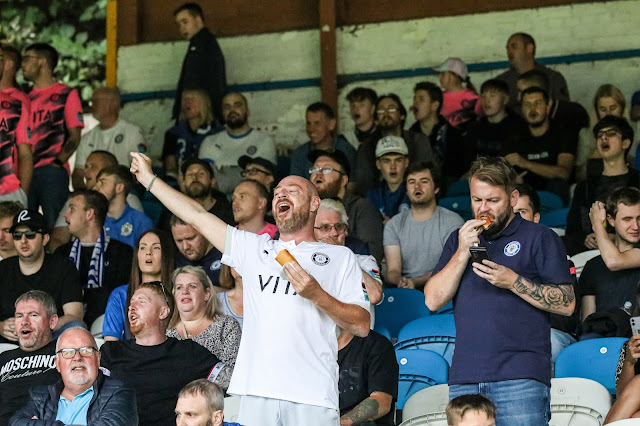 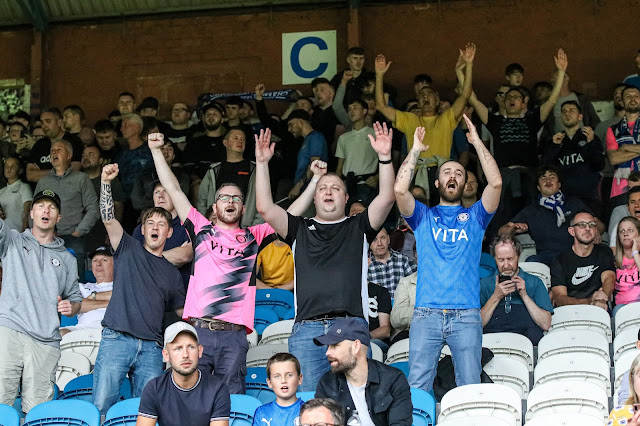 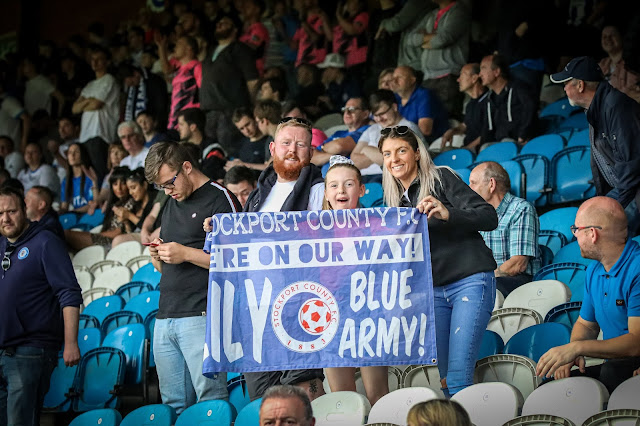 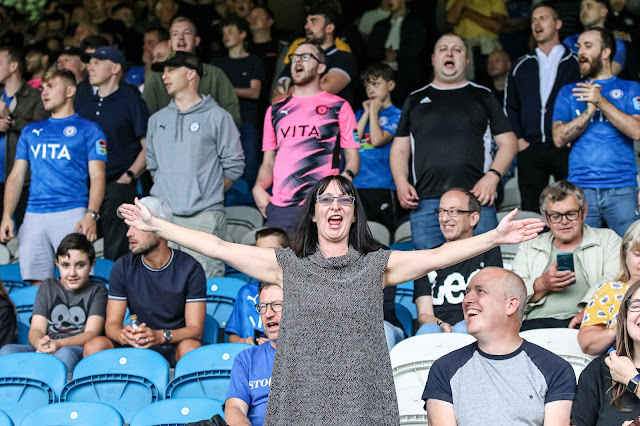 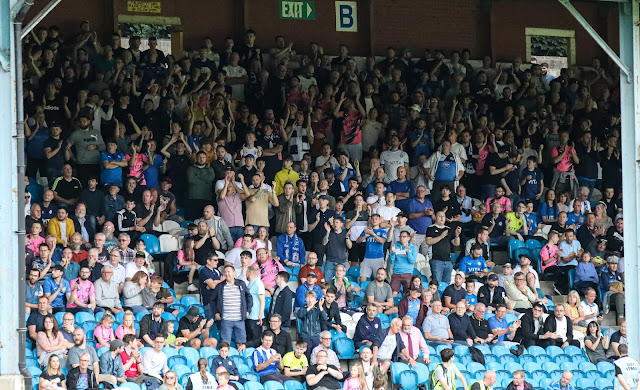 County were under the cosh from the start when play resumed after the break, and Hinchliffe did well to stop Waters doubling Town`s lead early on.

Kitching did some good work as the pressure mounted on the County backline after this.

Then County hit back through Southam-Hales but Johnson was intent on a clean sheet in his 250th game for his club, seeing the ball around the post at the last gasp. County made nothing of the corner.

But it was obvious that Halifax wanted a second goal, and it did not look all that much of an outrageous call to think that they just might nick it!

Green was prime mover for our hosts at this juncture urging his team mates up the park, and a loose ball almost set him up nicely.

County survived that action but looked shell shocked as Slew went close twice in as many minutes, Hinchliffe doing particularly well to keep the second effort out.

The hour mark arrived with County still under pressure as Spence stole the pill from Barclay, and again Hinchliffe saw the danger away!

By this time Fryers and Collar had given way to Whitfield and Walker........

.......... but we needed some solidity at the back and what we saw was Hinchliffe hung out to dry by his defenders allowing the dangerous Waters a tilt at goal. He should have scored I think but instead lifted a poor effort over the bar!

I looked for something from County in reply and it came from Madden, but when Reid latched onto his pass a terrific intervention by Warren prevented an equaliser.

I was briefly encouraged and more so as Rooney saw a shot pushed over by the keeper, as again County could do nothing with the resultant and a subsequent corner.

Slew meanwhile was becoming a handful down the right for Town, shooting well wide one moment, in behind the County back line the next, and then winning a corner off Kitching. It was all high-octane stuff from Peter Wild`s men and County struggled to mount a coherent response.

The pressure continued and Slew and Allen ratcheted it up several notches, with some neat play out wide. The cross from Allen found Bradbury lurking at the back post, and his precise finish made it 2-0 to the home side.

That was depressing, and more came at the other end where County won a free kick, then a corner without dinting the Town hegemony.

It went on, County winning another corner on 84 minutes, sending it flying out with the keeper sprawled on the deck having slipped.

It was impossible to ignore the `Palmer ` songs that were being sung by the County fans now as Slew went close yet again.

Then, just when we had settled for 0-2…..County`s defence folded again allowing Warburton to find Waters who made no mistake making it 3-0 to Town.

In the end a well merited victory for Halifax who were easily the better of the two teams.

For County this was another poor showing one that points to the fact that more than a wave of the cheque book and another striker will be needed to resolve it.

Meanwhile of course you will continue to support the team I know you will, so will I, but we do need consistent encouragement coming back at us from on the park.