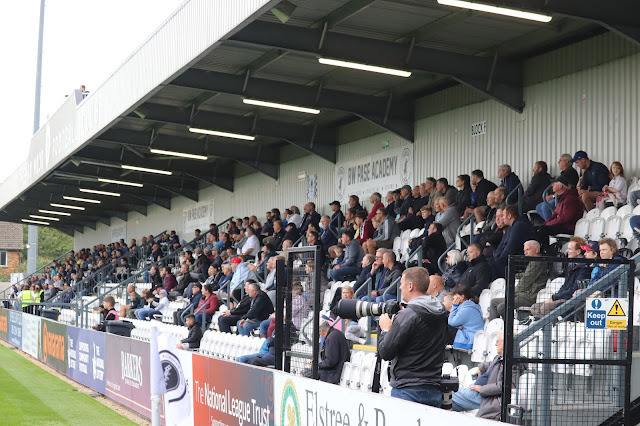 All images in this report - by hedgegrower

Meadow Park looked a picture in the late summer haze today, as Boreham Wood and County served up a 0-0 draw in front 782 spectators.

Numbers were pretty evenly divided between home and away specs but neither set would have been anything other than hugely disappointed with today`s fare from 2 teams that seemed totally unable to fashion a goal.

It was not a great match!

Collar and Southam -Hales came in for Rydel and Reid, which meant that Whitfield lined up wide left , the position he , by reputation, performs best in, but County struggled throughout to make their mark on the game, fairly comfortably losing the first 45 minutes to the Wood who showed an ability to  work hard but nothing exceptional beyond that, but they hardly needed to at times- the half ended with captain Madden`s indiscipline almost costing us at the death- his foul setting our hosts up for a pot at goal they really should have put away- they didn`t , and County survived.

The second half largely reprised the first, County conceding shed loads of free kicks , coming under much pressure as a result!

Occasionally there was a hint….just a hint of something better, and twice keeper Nathan Ashmore pushed County efforts onto the woodwork, but that was that really , neither side deserved anything from this game and can look upon one point as a massive bonus!

The game opened with the Wood attacking- Tyrone Marsh in behind the pink shirted back line, but flagged offside.

Marsh continued to press along with Jacob Mendy-Mendy, but without ever hinting that a goal was pending.

County replied through Southam- Hales but Whitfield was kept from the cross by Will Evans, the Referee `seeing something` and penalising County when the corner pinged in!

County were trying ,but so far the excellent Ashmore had not needed to show us what he can do.

John Rees stepped up next for Boreham Wood breaking up an embryonic  County raid down the left with the minimum of fuss.

I was looking to see what Whitfield could do on the left, but most of the action was being directed down our right where Southam- Hales was looking in typically lively nick and the twelfth minute saw one such move founder on an intervention by Jamal Fyfield just one of the clutch of home defenders looking to do the simple stuff well.

Raikhy and Southam- Hales continued to be involved, the former perhaps just a tad too much as, following  a County free kick which Evans saw off with some no frills defending, he clattered Kane Smith under Referee Whitton`s nose, earning a booking for his pains.

This also put County under the cosh from the free kick- they survived it and the follow up corner, but pretty it was not!

We needed County to tighten up but instead Madden`s loose ball , 26 minutes in, put the pressure back on us again. The free kick saw Scott Boden`s first time shot fly wide from close in- that was a real escape, would County learn from it?

Boden tried to make amends shortly after only to find Barclay on his case cutting his progress off- Fyfield doing well to stop the rot for the Wood when County replied!

Just beyond the half hour mark matters livened up with what looked like a passable attempt at a decapitation ( of Collar by Mark Rickets). He got` a word` from the ref which I looked on as laughable!

This heralded some defending for County as another free kick conceded near their box put the blues in difficulties again. They struggled to clear their lines  eventually trading on Woods inability to get a shot on target.

The 39th minute brought a rare chance at the North End where home specs held their breath  as a Rooney/ Whitfield move threatened, but Madden could not put the chance away and it stayed 0-0.

If County were upping their work rate now so was Evans and he was in top form for his side keeping Madden from a diagonal ball into the box from Keano.

Excitement dipped in the minutes remaining of the half, until we hit added time with Marsh surging clear to the by-line. He then played Ricketts in and it looked like the move would break down when ( Marsh I think) received the ball but seemed likely to lose it or play it back into the home half. Enter Madden, with a totally needless foul and Boreham Wood had a gilt edged chance to score at the death.

They really should have…..but Marsh instead powered a poor effort wide and saved County`s bacon!

That was an alarming way to end a desperately poor 45 minutes of play, we needed altogether better from County in the half that followed!

Now a few crowd shots, starting with a welcome shot of Pete , with son Luke at his first match since his transplant- welcome back Pete!:- 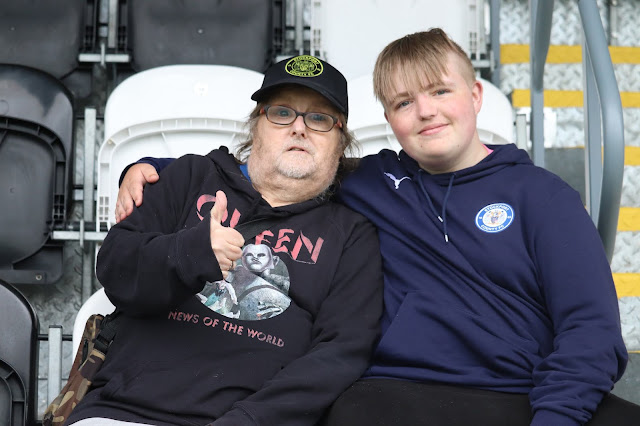 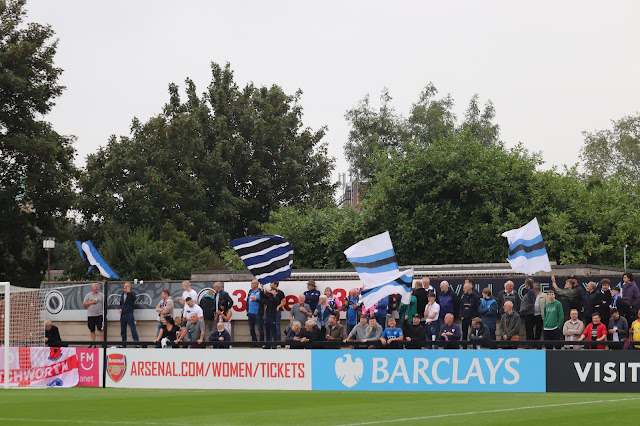 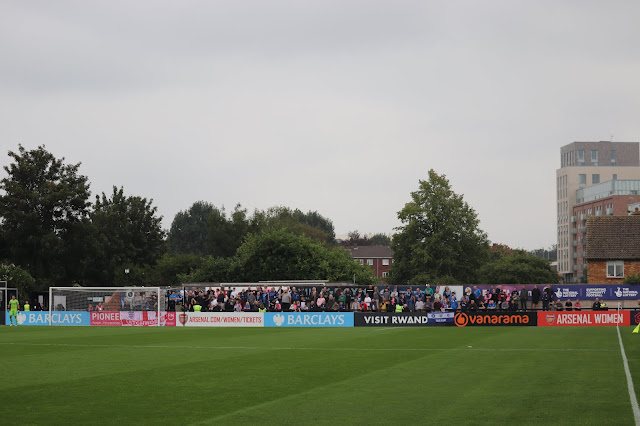 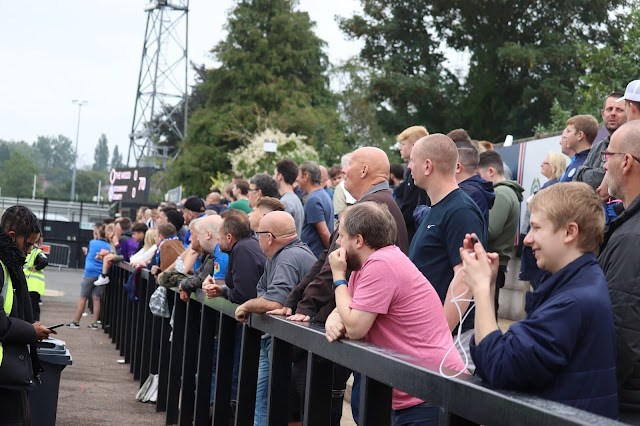 Reid was on for Collar when play resumed, County pushing on through Raikhy, Southam- Hales  and Keane. Raikhy made it to the by-line blocked by no nonsense defending from Fyfield.

Back came Boreham Wood as a climb by Palmer put us under pressure again. County were in some disarray from the free kick that followed and the ball was in the County net, but the home specs celebrations were cancelled as the referee blew for a foul . There followed a lengthy period of treatment for Hinchliffe as Ross warmed up and changed ready on the touchline, but Ben recovered and continued to applause from the large away following.

Walker replaced Raikhy just before the hour, as County slowly set about upping their work rate, but it was hard work…free kicks won….but blocked by determined defending by the Wood.

Corners came and went too, Whitfield winning one on 62 minutes only to watch as Evans shut the door to County with some brave defending.

But we were still giving free kicks away in alarming positions the latest ending with Ilesanmi’s shot flying into the North End terrace.

I was trying to convince myself that County were working at improving. They did win a free kick with 20 minutes or so to go after Whitfield`s tasty run had been cut short by a poor foul from Raymond. The kick was not that close to goal but Rooney had a go, only to see Ashmore sort matters in typical style.

Chances emerged at both ends next….Rooney sending a looping drive a yard or so out for County, while Ilesammi ran out of gas in the box after his surging run from the back had promised much  - his shot going tamely into Hinchliffe`s arms.

On it went with a Southam – Hales cross finding Reid whose goal bound effort was pushed around the post by Ashmore.

That was top work by the keeper, but County could not make the corner count, allowing the Wood to escape up the park for a time. Thankfully there was not a great threat coming from the home forwards and it stayed 0-0.

County came back at their opponents next, but the attack appeared to be breaking down when up stepped Keano to leather a belter in on goal that clattered into the woodwork with Ashmore a helpless spectator.

Boreham Wood came back at County after that last action, putting the blues under the cosh, but they lacked a certain lethality and County survived again.

By contrast County were trying to stir things up only to find Ashmore in peevishly good form pushing a late/late blue free kick onto the angle of bar and post!

To their credit County kept trying to get something from the game, but without ever looking that likely to do so.

In the end the sides had to settle for a point apiece and I guess that was fair enough.

That said we need to see some improvement on Saturday at Edgeley Park – defence is sorted largely…..but to win games we need to score goals, and there is scant evidence we are able to do this just now, although if we persevere with Reid , play him with the right support , we could in my view!

They need your support next Saturday so see you at EP!