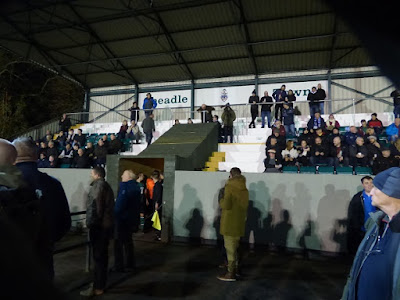 Drawing  Cheadle Town at Park Road in their first outing in the prestigious Cheshire Senior Cup was very much a potential banana skin for Stockport County to flounder on, but last night saw nothing of the kind as a County side leavened with a healthy number of Academy players succeeded in trouncing their near neighbours 8-1.

County’s starting line up had a defence made up solely of Academy players(Alex Jackson, Josh Robinson, Will Holt, Jordan Downing, and Tom Whitty)in front of Ian Ormson . I made Holt the stand out man for County…busy and insightful for 90 minutes…. but the defensive unit as a whole played  well throughout, allowing Town just one goal , from the hosts top man on the  night Jake Ambrose just a minute from half time.

At the other end of the park, goals came pretty freely ….3 belters from Bohan Dixon who played the full 90 odd minutes, and looked to be enjoying the occasion hugely, two emphatic strikes from Adam Thomas , and one each for George West, Harry Brazell, and Szymon Czubik . Szymon has scored a bagful recently for County’s junior teams including a 5 against Ramsbottom( nicked in just 60 minutes) and it was interesting to see him in action having stepped up.
He did not look out of place!
I was delighted to also see the input of second half substitute Adam Etches, another of our young talents. Adam was in phenomenal form turning the Town defence inside out at times and was unlucky not to be included amongst the scorers.

Add a return to action by the likeable Darren Stephenson and not a bad night’s work at all for Jim Gannon’s boys! 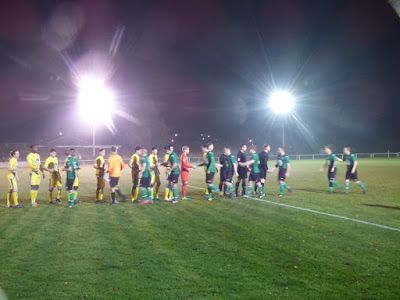 Wednesday had been a warm day, but as 7.45 arrived with a belt of cold air, an eerie mist started to form at pitch level, lifting and descending again match long.
Harry Brazel, who got stronger as the game progressed, was first with head above parapet but his shot cleared the bar by a bit. Town were not behind the door at this early stage , and County’s young defence did well to defend and clear the first corner of the match.

Another corner soon followed, but at the other end where Adam Thomas looked in a dangerously lively mood. Keeper Dan Whiting had work to do from this but did it well denying County an early bonus.

Bohan Dixon was another in County yellow that looked `up for it’ his energy setting County up for a shot from Josh Robinson that went wide.

Five minutes of interesting stuff followed with both sides having a go, before County took the lead through Dixon whose latest run saw him slam the ball home emphatically.

This action pleased the majority of the crowd of over 400, and it also encouraged County who took firm control of proceedings never to lose it. The closest to another goal came 20 minutes in with Harry Brazell’s run to the by-line. Harry’s lay back picked out George West nicely, but he was unlucky to see his effort go just a foot wide.
West turned provider next but Stephenson was crowded out attempting to add to Dixon’s opener.

I have mentioned Jake Ambrose as a prime mover for Town, but I also liked Remeece Brown’s work and he was clear of County’s defensive cover, and gazing into the whites of Ian Ormson’s eyes just 3 minutes later. It was a chance , but the former County lad’s attempted lob proved no problem for the County keeper.

But it didn’t….. and Adam Thomas made Cheadle pay dearly for it , his driving run  taking him around the keeper to double the County advantage.

County went into overdrive after that last action, and Town did well to keep it at 2-0, but it could not….and did not last, as Thomas  took advantage of a melee in front of Dan Whiting’s goal to make it 3-0 with another firm finish.

Credit to Cheadle, they did not lie down and County’s young defence again had to pull out all the stops to keep a series of corners at bay. The sequence ended with a shot from Ambrose just missing out.

End to end for a bit after this…Stephenson in there but foiled by the alert Whiting….. Brown wide with his second effort of the night for Town….. and Whiting in action once more  smothering West’s shot from the right.

Half time was not far off now, in fact there were only 2 minutes of normal time left when Stephenson’s cross from the left flank allowed Dixon to rifle home a drive of lethal power to make it 4-0.

County were still mentally celebrating that one when, they paid the price as Town nicked one back. Brown did the initial damage, his run opening things up for Ambrose who took the chance neatly from a yard or so out!

It was now 4-1 to County…and then it wasn’t ….as the yellow shirted blues piled forward en masse and amongst those salivating over the chance to score was Harry Brazel and he took massive delight in making it 5-1 with a neat strike.

That was the last action of the first half, and Jim Gannon must have been delighted with 5-1 as a half time score line!

There were no personnel changes for either side as the second half started with Ormson tipping a long range effort from Ambrose over the bar at the last gasp. Ormson did the biz again from the resultant corner but if County needed a warning shot across the bows- that was it.

However…….County  were in no mood to concede goals……. in fact they were hell bent on scoring more, increasing their lead not long after, as Dixon added the finishing touch to Darren Stephenson’s cross  with a neat  strike in the crowded box,
Again….Town responded in the right way- Ambrose setting Brown up for a shot that was not that far away….and Brown returning the complement, making it to the by-line before feeding the Town number nine. Ambrose was foiled as County’s defence closed ranks in front of Ormson’s goal and it stayed 6-1.

An interesting late run into the box by Brazel was the prelude to changes for County, on the hour, as JG brought Etches and Czubik on for Stephenson and Thomas both of whom had acquitted themselves well.

The changes seemed to enliven County’s effort, and Whiting did really well to tip a shot from the impressive Will Holt over the bar.

Etches was next to show for County…and how…his electrifying run down the right totally blitzing the Town cover. It was a brilliant bit of work and left West with a tap in, albeit under some pressure, from close in!

That was a satisfying goal, being the 100% product of County’s younger element. And Etches proved it was no fluke – seeing Brazel’s shot drift narrowly wide from another of Jordan’s magic runs into the box.

Jordan Peach came on for George West with around 15 minutes left, as I looked around to see a Peach  run thwarted in the box by Whiting.

We were 10 minutes away from a drive home and a warm, when Etches was sent crashing to earth as he again sped goal ward with massive intent! The free kick was deflected for a corner …then another as Town defended bravely and effectively.
But again…in the face of some excellent play from County’s young bucks, it could not last, and Czubik’s energy and enthusiasm was rewarded, with 9 minutes left, as he neatly slammed County’s eighth home.

It went on with Etches  and Czubik  keeping Whiting busy  joined by Brazel who looked to be as lively as I have seen him and not far away with a late/late effort. The impressive Will Holt was in the mix too, getting forward to force another save from Whiting with just 5 minutes left.

There was time enough left for Ormson to make a save from Dan Wood, and for Brazel to head inches wide for County.

A late injury to Holt, forced him to leave the field near the end to an ovation, but County’s remaining 10 did a good job in the few minutes that remained to keep it at 8-1.
Not a bad night at all for County, and a decent to excellent result….a good pointer to better things in the league- hopefully.

See you at Edgeley Park on Saturday for the return of FCUM then!