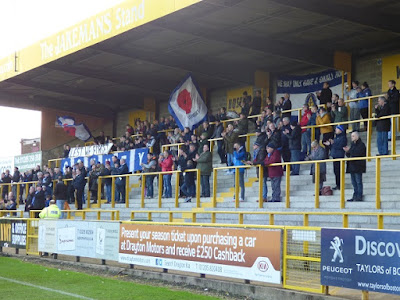 County came back from the dead to snatch a point deep into added time today at York Street, against a Boston United side that for long periods belied their lowly league status with a display of some fire and application.

The problem for Boston was that football matches are played over 90 minutes….plus some….and for the last 7 or 8 of them the Lincolnshire side’s focus had shifted ,unaccountably, to wasting time rather than pressing for a game killing third goal- a telling factor in explaining why 5 added became 7( it's the time wasting stupid, and it carried on after normal time!). They were 2-1 up at the time( and had been 2-0 ahead shortly after half time) and with pretty much the games last gasp  it was pay back time as the ball was lifted high into the Boston box where ,to the accompaniment of joyous scenes behind the goal, Jimmy Ball rose to head the equaliser home.

How fantastic was that?  Very……and though Boston protested about the added time……. based on their late attitude and tactics ….they did not have much of a case, and I thought that Referee Sam Mulhall had an excellent game ( yes you did read that correctly- how very dare you!) and he got this bit right as well!

That said we might just take time out to consider how, notwithstanding their uncharacteristic energy, we allowed Boston a 2 goal start. We just could not handle the Boston long throws, yet we kept conceding them from tasty positions. The result was….2 long throws….2 Boston goals!

But hey…..the point looked to be far away late on, so let’s celebrate it!

The early minutes offered no real idea as to which team would prevail. Both pushed on a bit, but …whilst Boston looked  rejuvenated and  a decidedly better outfit than their league position suggested, it was still 0-0 with 6 minutes gone. 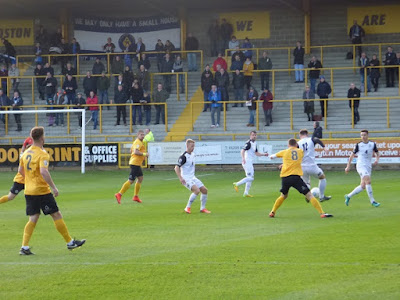 Oswell and Duxbury pressed on for County after this , but still no goal came even after the white shirted blues won a free kick –

-Clarke joined his forward’s vying for this, but Boston defended it well ,taking advantage of indifferent play in possession from County, to break clear via Jordan Keane who sent danger man Ashley Hemmings clear. It took some good work from Cowan to stem that tide.

The next action saw Sam Muggleton’s raking  diagonal ball to Hemmings send him clear again, but whilst the forward managed to elude his marker this time, his shot whizzed across the goal before going out.

Oswell went close a couple of times after this, but then so did Boston, who were feeding off some imperfect play,in terms of possession retention by County. We were defending well, but we needed too because of the possession being shipped further up the park.

The 21st minute brought a rare moment of County excitement as Boston keeper George Willis had to make a decent stop to keep Kallum Mantack’s goal bound effort out.

This was followed by a barn storming run by Stopforth, that deserved better. Stopforth was looking in good nick again and he looked not to be deficient in the possession retention department, his energy offering a beacon of hope.

The 28th minute saw County on the rack though, and only a tackle of the very highest quality from Cowan ensured that Gregg Smith failed to profit from his break from deep.

Up until this point County had just about coped with a blizzard of long throws hurled at them by our hosts, and smack on the half hour…they coped again as Cowan hooked  the ball clear from in front of goal.

Angst settled then…except it wasn’t as another throw was conceded and another cloud scraper headed into the County box where Smith was able to head the ball home.

That was an awful moment for County, but they had been warned before hand , and another warning followed quickly on from this as goal scorer Smith  sent Hemmings scurrying at speed to the by-line. The cross that followed was far too deep to be affective, but unaccountably County failed to take advantage, managing instead to concede yet another throw, and Hinchliffe did well to grab this as it came down with what looked like ice on it!

We were heading for half time now, with no real sign that County were about to strike back…OK….Dixon and Ball both had shots charged down, and Duxbury’s enthusiasm almost put Oswell in at one point, winning his team a corner at another, but when Willis punched this clear under pressure any chance was gone. 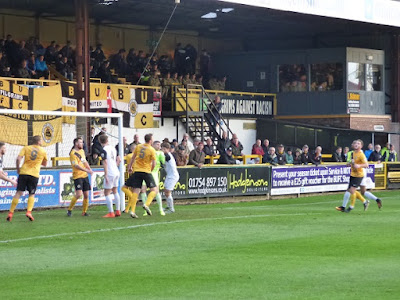 Long Boston throws continued to proliferate in the remaining minutes until half time, but it was still 1-0 to the home side when the teams headed in for a warm and a word or two from their respective Managers.

JG sent his team out early for the second half, but would we see them turn things around?

The second half saw County on the front foot, but their attacking forays were not making an impression, indeed at one point, Jay Rollins almost made them pay for their slackness, his break from deep setting Hemmings up to win a throw.

This was cleared … ushering in a response from Mantack that saw O’Halloran go close with an effort.

A corner followed …but no goal despite much hard work from the men in white shirts.
Then….it happened….another throw was conceded….and this was hurled a prodigious distance, coming down from the lower stratosphere for Hemmings to send the home specs into raptures in response.

County had a mountain to climb, but that is territory that County Supporters are well used to frequenting. To be frank…I was not that sure quite how this County team would react, but my doubts were ,in part, sorted, and just 5 minutes later as Warburton slammed a free kick of rare quality home.

Cue raptures from the County following this time, as renewed hope surfaced again in the steadily cooling Lincolnshire afternoon air.

Game on then…but County had a corner to defend…..then another…but Boston could not regain their 2 goal advantage no matter how they tried, to penetrate a County defence marshalled in fine style by Michael Clarke.

County still had their quota of long throws to cope with, and with 15 minute s left another pinged in setting Jamie Maguire up for a shot that Hinchliffe did well to keep out. 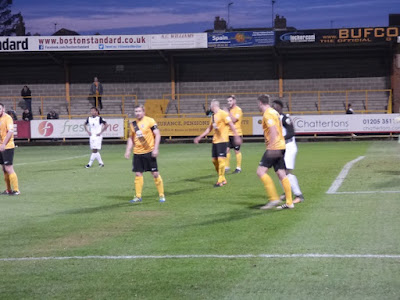 Boston went close a time or two after this, hitting County on the break, as a County raid would break down.  There was great danger of us being caught out in this fashion especially with Rollins now programmed to run at us from deep positions.

But County continued to try to get the ball forward into their opponents last third- just that vital final touch was repeatedly missing.

Stopforth’s head was also almost missing next as a swing of Brad McGowan’s boot almost removed it from the County man’s shoulders. We got a free kick of course, but with Stopforth still off the park, County could not take advantage of a kick that was in rather a good central position.

That was disappointing, and so was Boston’s increasing use of time wasting which saw the referee talk to Willis at one point.

Yep….Boston were plainly architects of their own downfall…. hastened by a foul that saw Hinchliffe head off into the Boston half to take a late/ late free kick. This was hacked clear by Boston but only to Duxbury who was lurking somewhere in the far off gloom. Scott lifted a ball over that shared everything with the cloud threatener’s described earlier from Boston…but with added accuracy…and as it came down midst a forest of bodies, like an exploding scud missile,….up stepped Jimmy Ball to head home and get the rapture bit rolling again as County fans reacted with relief and joy.

The game had been salvaged at the last gasp….. Boston protested …but as Mandy Rice Davies put it….` They would wouldn’t they’

Nuff said….a fantastic point in the end…. great to come back from 2-0 down to get a result.

Get celebrating County fans…life’s too short! 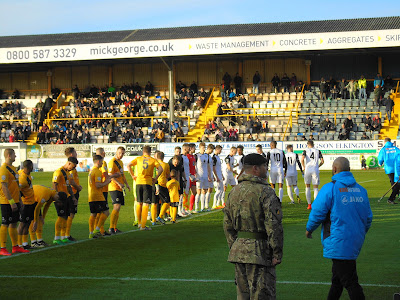 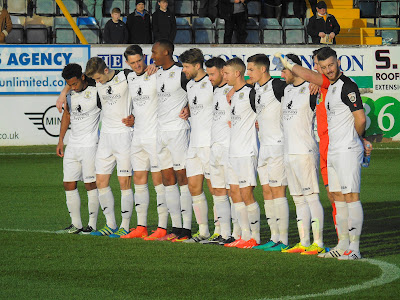 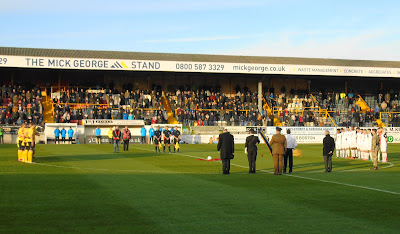 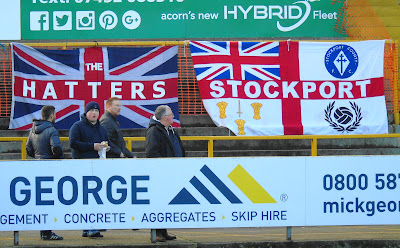 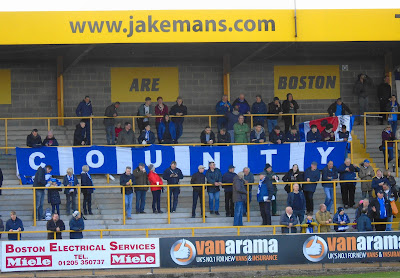 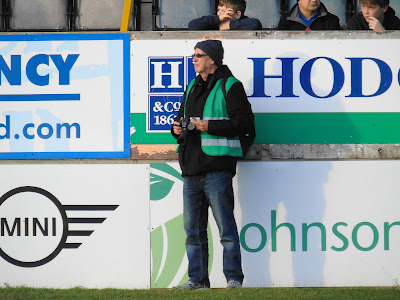 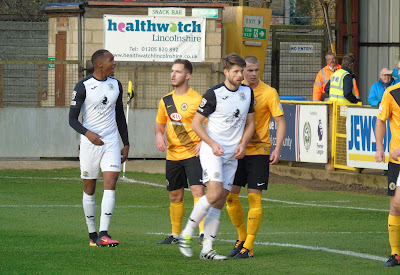 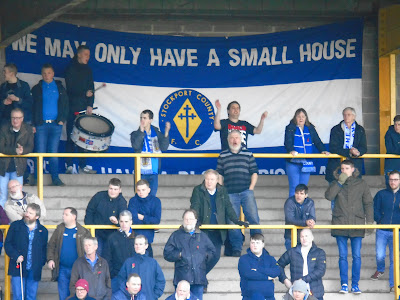 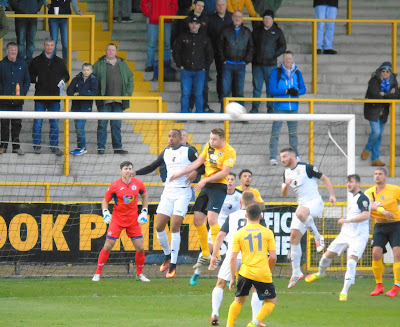 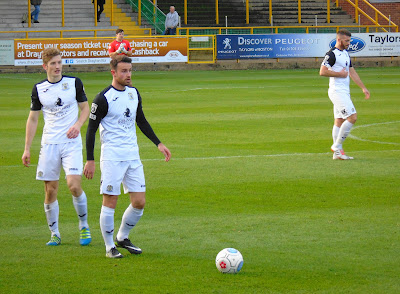 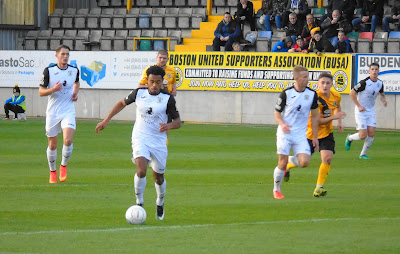 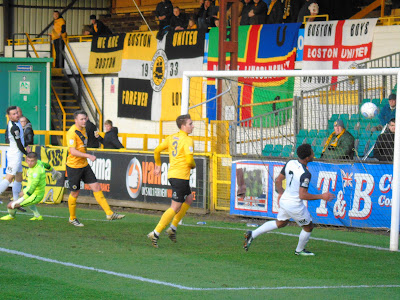 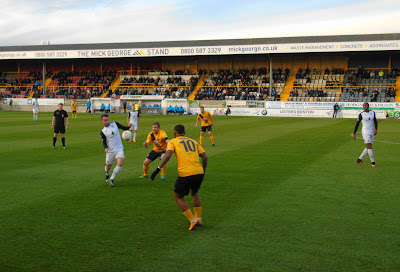 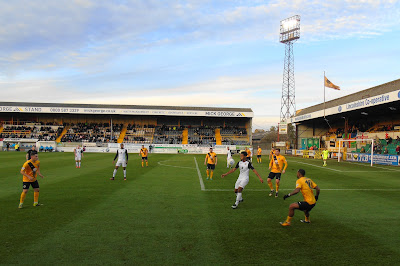 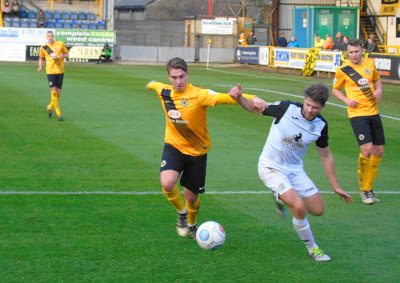 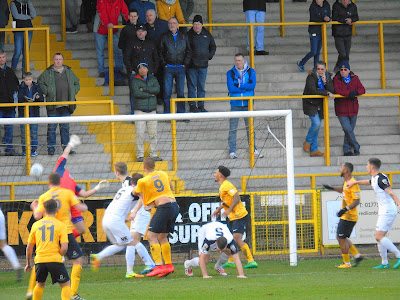 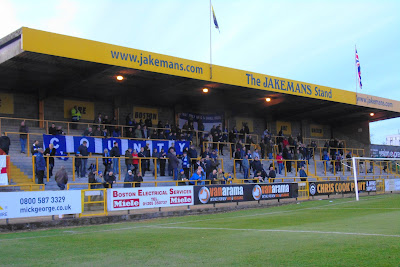