County duly won their way into the Second Round of the FA Trophy, with a well earned 3-1 victory today away to Lancaster City.

City were a doughty set of battlers……no real surprise there…..but ….with County apparently cruising 2 goals to the good at half time….and pushing on looking very capable of increasing their lead after the re-start, the game suddenly swung in the Dollies direction.
A penalty awarded by referee Steve Coupland, for what I have variously heard described as........`a push’…..` a  trip’…` a hallucination on the referee’s part’, was the catalyst for a  change in the games direction.

It was 2-1 when Ryan Winder put the spot kick away, and Lancaster did rally quite well afterwards, albeit without ever looking on for an equaliser.

County did begin to assert themselves again, after a while, but a certain tension still prevailed, until substitute Bohan Dixon ended County’s angst with a crisp finish that took a slight deflection on its way past keeper Josh Powell.

Some were a bit sniffy about the win, but not me…I thought there was much to be happy about in this display against a side that Phil Brown had set up in a typically tight formation . City coped reasonably well with the County attacking moves, until the first goal went in, then things went a touch awry for the Dollies.
Whilst County, with Harry Winter looking in decent trim in front of the back four, looked very comfortable dealing with the City replies.

Oswell’s goal changed that, and Stopforth’s opportunist second seemed to put the game to bed…..little did we know!

Back to 3 o’clock then, and a decent crowd were inside the Giant Axe as County attacked the covered end, which housed the younger and more voluble element in a healthy County following.

Most of the early pressure came from County, who had Stephenson and Mantack attacking down either flank, the latter taking up a more forward role  than sometimes he has been called on to do of late.

Both were getting forward nicely and getting crosses over, and Rick Mercer did really well to prevent Stephenson  from applying a finish to a Mantack delivery early on.
Oswell was in the mix also, and he was unlucky more than once, being foiled at the last gasp with a goal in the offing. 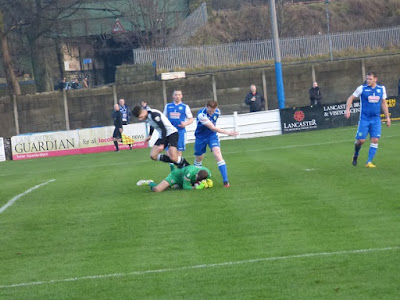 Sam Bailey, a decent performer for the Dollies, caused a ripple with a high ball to the back of the box at one point. Hinchliffe did well to punch clear from that, and I had noted Bailey’s name as 1 to watch today. 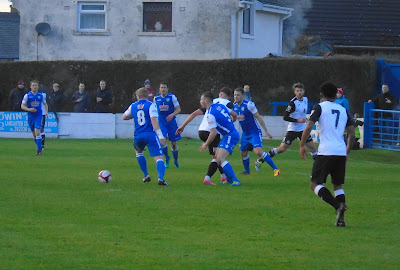 Mainly though….as I say…..it was County doing the attacking and a lively cooperation between Stopforth and Stephenson for County, almost prised the home defence open, but the City back line…held firm. 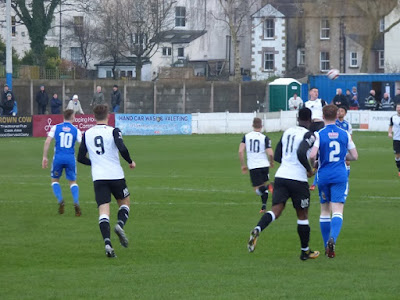 For how long though, that was the question, as Oswell was again thwarted by the keeper. 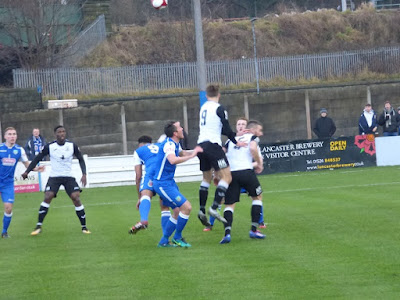 But….there was still Bailey…..and the 20th minute saw him pop up to win a corner- his cross teeing Billy Akrigg up for a shot that took a deflection off a white shirted County defender.

County saw off the corner in encouraging style, swinging into attacking mode via the wiles of the eternally energetic Gary Stopforth. He looked in prime

form……again…..and Oswell was once more unlucky to see his shot deflected for a corner on the end of Stopforth’s through ball.

The corner was claimed by Powell, but the County attacking continued- Akrigg, rapidly emerging as another to watch, doing particularly well to block Ball’s run.

That was 26 minutes in…another 60 seconds and County had the lead they craved .

They were attacking down the right through Cowan , and the cross that followed , although spot on still required much doing as it arrived midst a bunch of mainly blue ( City) shirts in front of goal 5 yards out. Oswell knew the score and another Herculean effort from him saw him climb above all to power his header home.

That was an impressive finish , and set County up for a period of control , only interrupted briefly by a run from Paul Dugdale , that Cowan dealt with neatly.

We were 10 minutes from the break when County doubled their advantage, and it was a master class in opportunism from the tireless Stopforth that achieved it. Gary…put simply…had no right to expect any chance of getting near the ball…never mind win it as keeper Powell advanced out of his goal to make an unchallenged clearance.

Oops…..enter Stopforth with his challenge, and before you could even gasp in amazement, he had the ball and headed goal ward to slam it home.

That was excellent, and looked likely to set County up for a trouble free  second  half( note any unforced errors on my part yet?)

Well……despite Dugdale and Akrigg combining nicely to force a couple of corners, I still felt County would have enough to prevail. 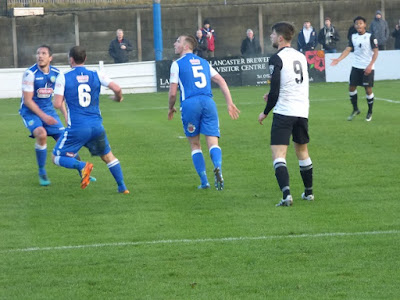 Oswell went close from Mantack’s cross smack on 45 minutes, and Stopforth and O’Halloran did likewise in added time, to allow me to cling to that reckless theory at least for now.

The first 5 minutes after the re-start saw County piling pressure on big style, mainly via Cowan and Mantack down the right, but not exclusively.

More than once Powell was forced into action, punching clear or claiming a ball when all looked about to be lost.
Ryan Winder came on for Lancaster, 8 minutes into the half, and within a minute he was at the hub of the action, as the referee saw an infringement and pointed to the spot.

The locals were suitably jubilant at this windfall. None more so than the aforementioned Winder, whose spot kick gave Hinchliffe no chance at all.

It was now 2-1 ……and from a position of almost total dominance by County, it was now game on, and Hinchliffe was in action again just a few short minutes later denying City and preventing, an equaliser and an unwanted Tuesday replay!

County were still attacking at this point, but a lot of the devil  ,so apparent earlier in the game, was now less so, a great credit for this going to Phil Broen’s side who were keeping their shape pretty well on the whole, and again….Hinchliffe had work to do…tested by another effort from Winder.

Lancaster were doing a decent job of hitting County on the counter as well, and it was more than a tad worrying , with around 25 minutes still remaining to play.

Oswell did offer reassurance…only to see Powell smother his effort at the last gasp.
Thomas had replaced Winter earlier, and JG moved again bringing Duxbury on for Smalley- a brave move that saw Mantack switch flanks, and he and Thomas  were unlucky to see Powell emerge with the ball after the pair had plundered the home back line.

Lancaster definitely fancied their chances now, Dugdale making it to the by-line . His cross went behind……City having shots blocked and corners cleared with varying degrees of comfort by County thereafter.

The horror story would be for a shot…a corner to sneak in…..

But before that eventuality could morph into reality, JG brought Dixon on in place of Stephenson with just over 10 minutes left to play.

It continued in the same vein…..County working assiduously at killing the game off with a third goal, whilst Lancaster concentrated on hitting on the break.

Accuracy and concentration was of the essence then…for both sides…and City were the first to crack in this respect- the loosest of loose balls being snapped up by Dixon just outside the box. Dixon looked up….took a step or two forward before unleashing his effort. It was  enroute to goal when it took a slight deflection off a defender taking the ball way out of Powell’s grasp into the net!

It was 3-1 to County  and the away support signalled their delight loudly, as the locals commenced their drift homeward.

That was very late on….there were 3 minutes of added time to sort, but that was done without any undue alarms, and the victory was County’s, who now head off for a second round tie wherever.

For Lancaster, goes much credit for a decent showing that marks them out for good things if they can keep it going.

Flyer to Ashton next then…see you back in the Vanarama North then next Saturday!