Stockport County opened their 2017/18 pre-season schedule of games with the traditional pipe opener against Linotype Cheadle Heath Nomads , just down the road at the Heath.

The place was baked in sunshine and the touchlines overflowing with Stopfordians eager to catch a first glimpse of James Gannon's team.

It's a brave....nay foolish man who offers predictions for the coming campaign, based on a fixture so early in the pre-season , but there was sufficient on show from the lads in blue shirts for the average County fan to feel reasonably content going into Tuesday's follow up encounter with dear old Alty.
Before the game there was a minutes applause for Bradley Lowery, which was nicely observed and executed!

Then.....once again Nomads gave us a decent game, defending like lions particularly in the first half when JG had his top men out. 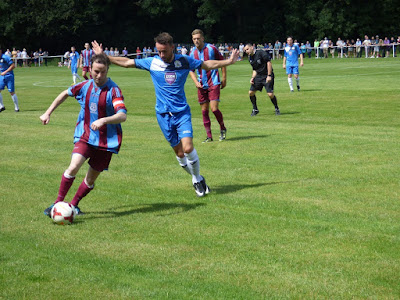 The play out of defence wasn`t bad either from the Cheshire League side , but they could make nothing of consequence from their labours at the other end of the park where Clarke and the returning O'Halloran shut the shop up as quickly and  thoroughly as the old time  pub landlord  was prone to do at closing time.

In front of the back four ( Minihan, Clarke, O`Halloran, Hampson) we had Winter and Walker and again they were very much in charge.

Walker's input was thoughtful and not unproductive at times, but I was very pleased to see Winter put in a great shift- winning the ball when definitely needed at the back, before switching play with a long incisive pass ( usually to Stephenson) that put the hosts under the cosh.

Having mentioned Stephenson, I will do so again, and say he was a constant threat, scoring twice and going close a time or two at other times- greatly looking forward to seeing more of Darren this term! Elsewhere ...Jimmy Ball is not everyone's cup of char, but he did OK today and looked in it to win it, nicking the opener .

Other than that, nobody in blue blooped at all and I must give Harry Brazell  a nod for another energetic and skilful showing when he came on for the second half- I am biased of course...I like Harry's game...and I am definitely not alone in that!

It took County just a couple of minutes to  open their account , and it was a run from Stephenson that did the initial damage, forcing Tom Rodgers to concede a corner, from which Jimmy Ball's glancing header from close in did the trick.

Nomads came back at County after this early setback but despite winning a free kick when Keiron Hibbert was fouled en-route to goal,it ended in tears for the home side when Hinchliffe nipped in to snaffle the ball  before Ashley Harrison  could round on it.

It was at this point that my concentration went for a burdon, as I sighted the  Man in a Hat....HATLESS !

No sooner had normal service been resumed than County conceded another free kick in a temptingly scorable position. Harrison had done well to win the kick, whereas Referee Scott Healy had done less well in awarding it. No matter , there was defending to do and Clarke did it well, heading clear in typically imperious fashion!

Free kicks kept coming and at one point Hampson earned his corn with a nippy clearance off the line  from a Johnny Hurst effort. Harrison was in the mix too but no more successful than Hurst, sending his shot spiraling over the bar.

With Walker and Winter tightening things up a tad, County started to cut Nomad's options down and create a few of their own, and in this respect ,with Winter as provider, Stephenson was looking to be a major threat to our hosts piece of mind!

Half way through the half, Winter 's long ball had Stephenson zeroing in on glory in the final third. Warburton flicked Winter`s ball on to Stephenson only to see Liam Donaher block the path to goal and clear.

County were running free now and had the ball in the net via Oswell, but his header, from a Stephenson flick on, was ruled offside.

The County impetus was building strongly now  with Stephenson and Warburton going close without reward, but with half time just 16 minutes away ,at last County doubled their goal tally ,and it came from Stephenson.
Winter started it , his ball moved on skilfully by Walker to Stephenson whose finish gave keeper Aaron Tyrer no chance at all.

Shortly after, Stephenson went close again , rounding off some neat work from Ball and Oswell with a strike that was not that far off!

County were now looking in charge, and it was no surprise when a third goal was added, again via Stephenson. Tyrer had done well to keep a strike from Oswell out, but failed to hold onto the ball allowing Stephenson to nip in and force it home( See the Additional Gallery 1 for this pic).

It was 3-0 to County , and that was probably a fair reflection of how it had gone down, but it was half time too, and time for wholesale changes in the County line up.
The second half saw just Clarke and Walker of those on duty for County, out again for the second 45.

There were chances galore in theory for a whole host of players, and one such, Adam Thomas, looked in decent nick as the action re-started , but his crosses did not always find takers , which was a frustration as was a miss by George West after Harry Brazell had laid it on a plate for him.

County's failure to round moves off allowed Nomads to respond at the other end where Clarke did ever so well to deny McGregor on the break.

West did work hard after that earlier miss, Donaher doing well to keep Etches from a  West cross one minute .....Rodgers foiling the young County player with a neat block   the next.

O'Halloran and Ball came back on late on for Walker and Clarke, and both surprisingly made light of the undoubted difficulties inherent in returning to the field of play in such a way- O'Halloran stopping a neat break from substitute Taylor. Ball had lost possession to let Taylor away with that one, but he regained his composure soon enough to force Tyrer to make a save. It took the keeper 2 go's to keep Ball's long range strike at bay, but he did it and kept it at 3-0.

County kept trying until the end but ,Nomads arguably did not deserve to concede again having shaped up so well throughout a decent game.

Catch you all there no doubt!

Firstly thank you to d.wright_08@hotmail.co.uk for these.... 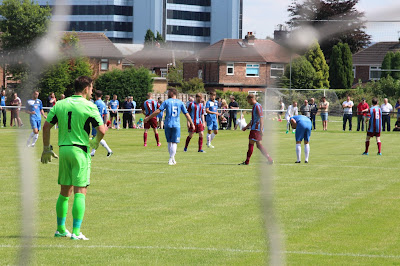 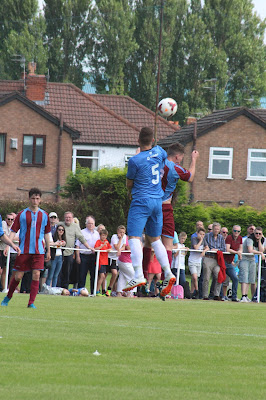 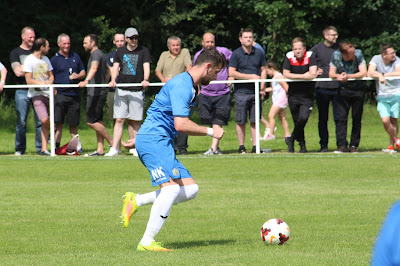 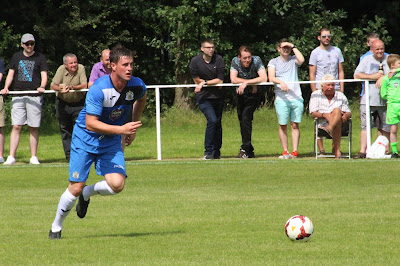 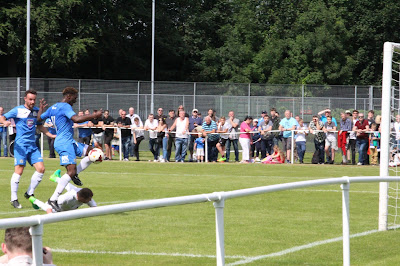 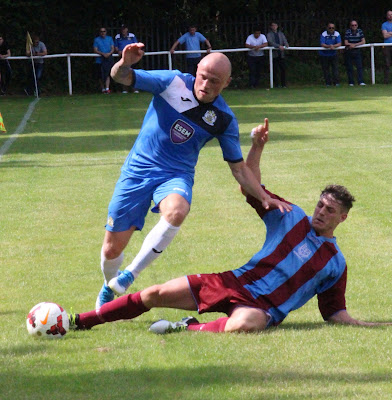 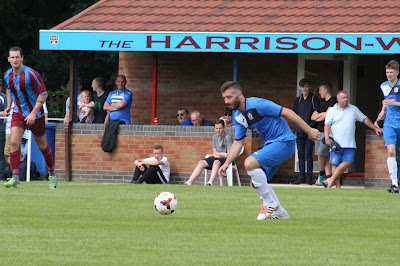 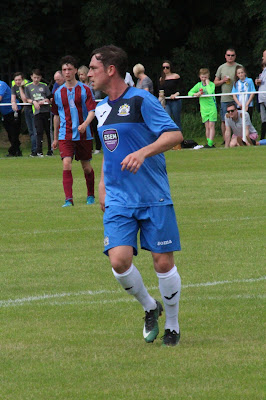 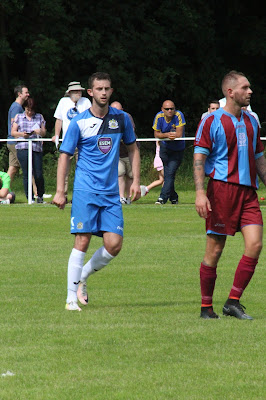 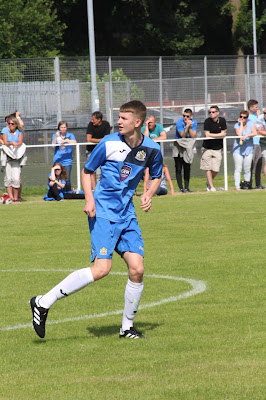 And next off, a gallery of fine photos  from regular contributor Andrew Machin... 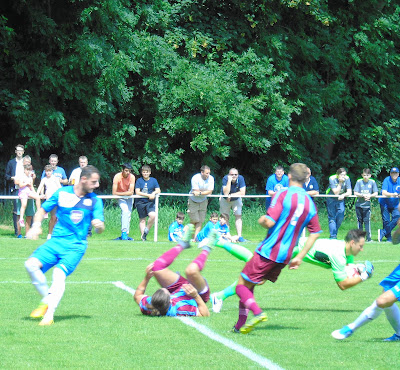 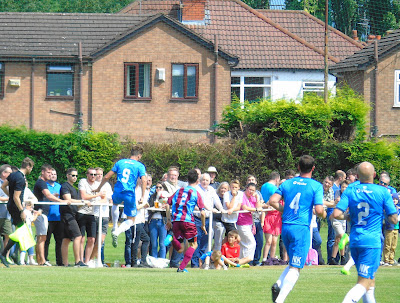 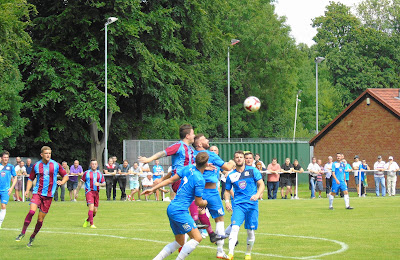 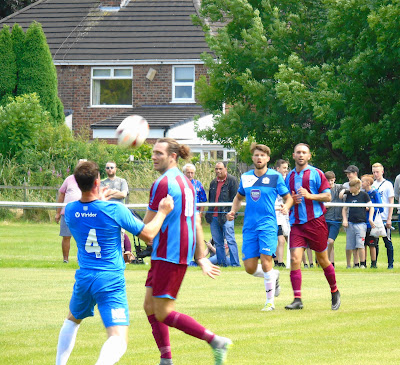 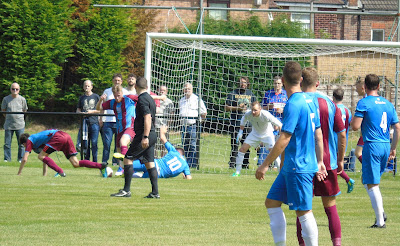 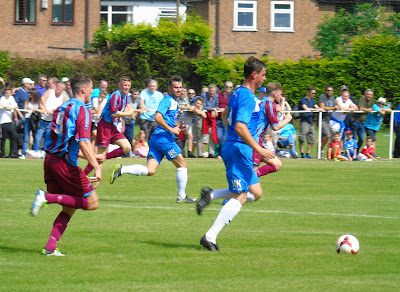 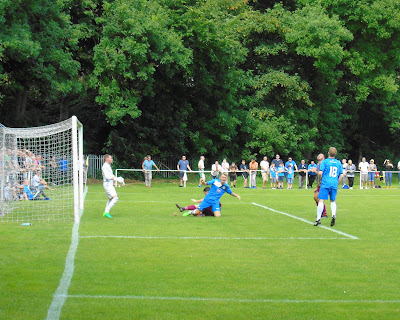 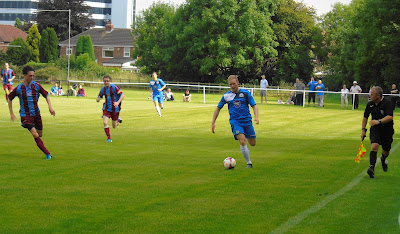 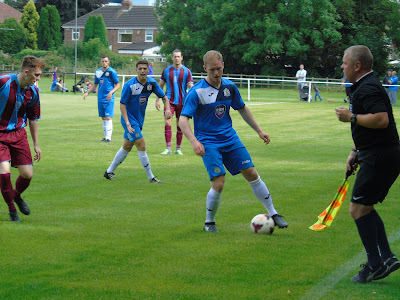 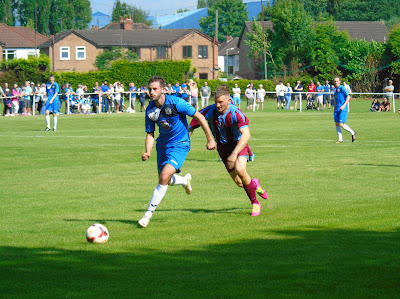