All words by hedgegrower/ images by Andrew Machin .

This was so …so disappointing, as in front of over 2500, and a goodly portion of the  nation watching via BT, County imploded before our eyes at a sweltering Edgeley Park today. 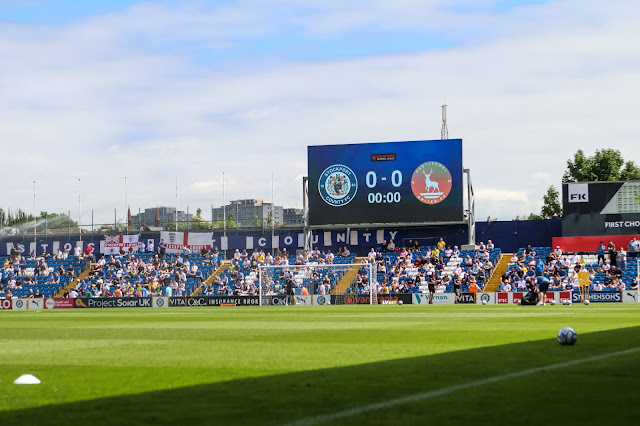 With all 4 sides of our great stadium housing nothing other than County fans ( barring the usual visiting Directors, and the odd City fan who I note sneaked in the Railway End) today`s play off semi -final was County`s to lose, and unfortunately they did! 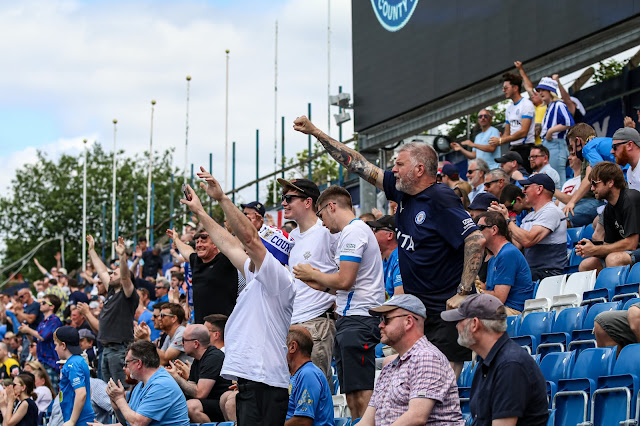 The margin of defeat was narrow, just 0-1, with only Rhys Oates` 75th minute goal separating the two teams, but the nature of the goal, was massively disappointing. The strike by Oates was perfectly executed, but sadly laid on plate by Ash Palmer who over stretched himself running a routine ball up the park before promptly losing it.

This rather summed up the blues day- off the pace( Madden has the excuse of having been injured, but start him and give him the whole 90 odd minutes when top scorer Reid came on with just 18 minutes left, Bennett 8 minutes later, surely not!), add Rooney`s one paced contribution to the mix and , despite home advantage, County`s task was always going to be an up- hill slog.

I thought JJ and Southam -Hales showed the urgency required by the situation, and Hogan worked hard too, but this urgency was not catching, and in the end there seemed to be a certain air of resignation about County`s performance – a depressing end to a season that started promising much!

And the day started so well …..with Steve Bellis making a decent fist of getting the crowd in the correct match day mood, with the help of a clutch of County heroes. Alan Ogley shone brilliantly in this setting and just about the right mood was established as a result. 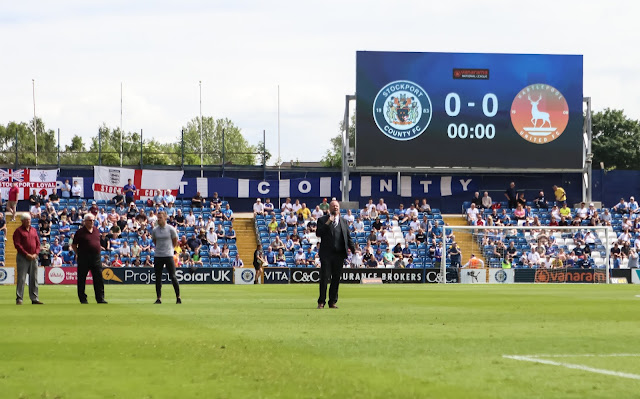 My pie was excellent too , and just what was needed in the minutes before kick off!

That was where the happiness ended unfortunately, and I was bewildered to see top scorer Alex Reid on the bench again when we needed to win this one.

We were clearly giving Pool max respect, whilst they concentrated on getting the basics right, and the first one for Challinor`s boys was to get us to play towards the Cheadle End first off, and …hay ho….that`s how it shook out!

No matter, we would surely have a decent go at this one, and JJ certainly gave that impression straight off, his cross just eluding Cardwell, and a second shot /cross gave Brad James some early work to do- I was heartened!

This mood continued as Madden earned applause by robbing Timi Odusina in surprising fashion, but that was pretty much the games high spot for Madden and Odusina`s day just got better from that moment on as he supplemented defensive work with surging runs up the park!

The Cheadle End were in good voice now, and I could hear Yellow Block to my right on the Pop Side  giving it some as well- things looked to be well set, but when Cardwell sent Southam – Hales darting clear 7 minutes in, and he picked out Madden neatly with his cross, he dragged his first time effort wide of the goal with James a spectator- the moment had passed , a decent chance had gone begging!

This prompted a response from Pool, and it came from Oates, but he saw his shot charged down, a prelude to a few minutes defending for County with Oates`s powerful runs down the right putting the blues under much pressure. They stood up to the task well though and it stayed 0-0.

It took 5 minutes for County to fashion a reply, and it came via JJ whose incisive cross found Shelton quickly locating the reservoirs with the ball.

County were not done, indeed a neat move promised much, but ended badly as, after Walker had won a corner, Rooney then lumped the kick over everyone`s head allowing Pool to eventually clear their lines.

We were beyond the half hour now, and really it was anyone`s game, and I was relieved to see Croasdale in good nick stopping Holohan`s tasty run deep in County territory.

Three minutes later I was relieved again as Oates, having left Palmer in his wake, then shot wide- a real let off!

After that action, County began to build up pressure again, and a foul on Rooney served to ramp this up more, but Pool defended it well.

This begat a late rally by Pool and a bit of a let off again for the blues as I was sure Madden had a hand to ball moment in the County box. Mr Richardson either did not see it or thought otherwise, so no pen and it remained 0-0 as the teams went in at the break. 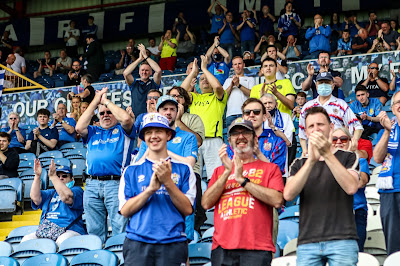 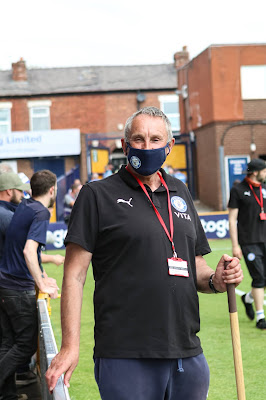 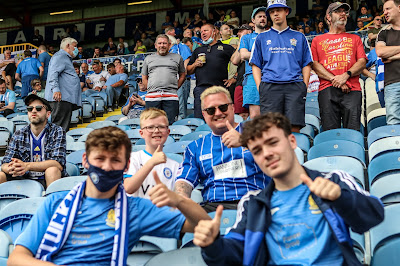 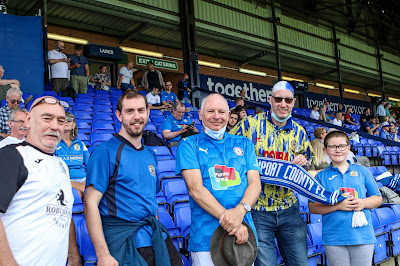 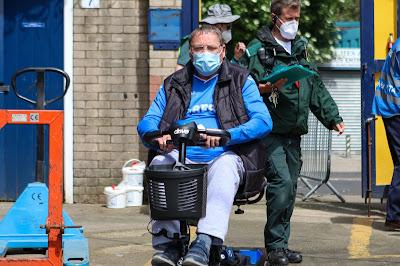 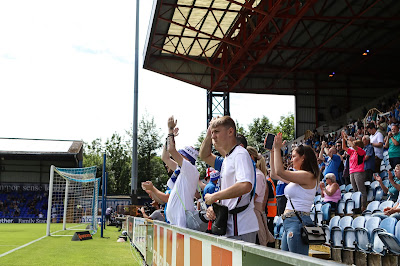 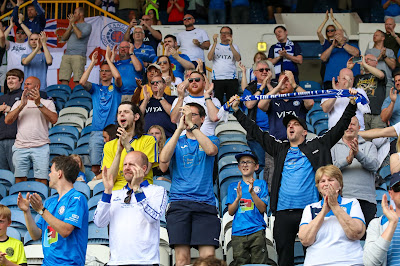 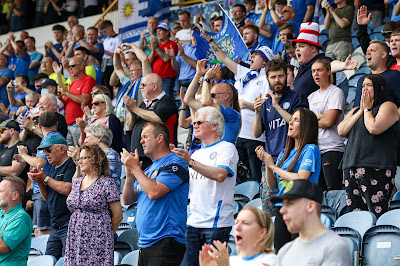 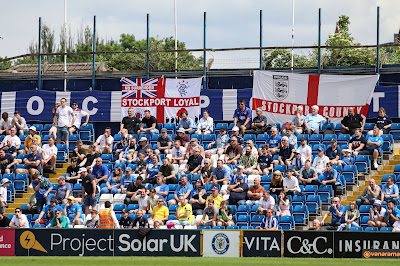 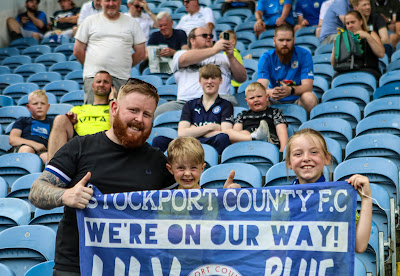 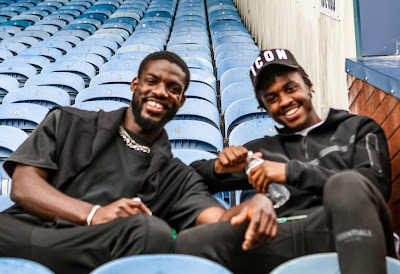 An early catch by Hinchliffe under pressure from ex County trialist Oates, was the prelude to a spate of attacking by Pool when play resumed after the break- Armstrong winning a corner midst it all but nothing more irksome.

County meanwhile looked for an opening, without success, a reply coming from Mark Shelton for the visitors, but he overdid the falling down bit on finding himself inside the County box, and he was distinctly fortunate not to see himself booked for just about the most obvious theatrical dive of the season!

Madden and Cardwell combined next to push Pool back, but the latter could not force the ball beyond James.

Back came Pool, in reply, and the blues were indebted to captain Hogan whose top grade defending under pressure saw off Holohan as he threatened down the left.

The pressure continued on County however, and Croasdale did well to keep us afloat midst a flurry of yellow shirts busying themselves where they shouldn`t!

On the hour Newby came on for Cardwell, and within a couple of minutes I guess he was wishing himself back in the safety of the bench as Holohan made a passable job of taking his head off his shoulders. I   understate the situation massively by stating that the Pool number 14 was lucky to stay on the park after that one, but hey ho….yellow it was!

Free kicks and corners kept Pool defending for a while next with Southam -Hales doing most of the work for the blues, but it did not last and with 20 minutes left it was hearts in mouths time as Shelton slipped Hogan and cut inside . This was dangerous, but only until Palmer appeared on the scene and hurled himself at the goal bound shot forcing the ball behind for a corner, which happily Hinchliffe gobbled up hungrily.

The 72nd minute saw Reid at last on for Cardwell as both teams continued to seek that elusive opening.

Sadly it came at the wrong end, and pretty much out of nothing as Palmer decided to venture out of the box with the ball only to lose it in the process, allowing Rhys Oates the opportunity to make his side`s day, which he promptly did by burying a firm strike beyond Hinchliffe`s dive into the net to give Pool the lead.

It was another 5 minutes before Bennett was brought on for Walker- when he might reasonably have been given a start alongside Reid ( a partnership that worked well earlier in the season ).

As it was 10 minutes is no time at all- JJ almost reached him with a deep cross at one point, and James did for his header in the games dying embers.

Add a scissors kick from Southam – Hales at the death, and that was largely it from County who were pushed back in the closing minutes, a situation spiced and made worse by a spectacular ( 10 out of 10 rated ) dive by Oates that brought more pressure via the cheapest of free kicks.

Sadly the Danny Stand side liner did not help, steadfastly refusing to raise his flag at all late on with Pool happy to seek to profit from his indolence!

It was ever thus I suppose, and soon enough the game was over, as was County`s season.

Another season now beckons in `non-league`.

You may think I have been unduly critical in this report, but whilst hedgegrower has traditionally been supportive for my comments to have any value at all they need to be an honest reflection of my view on what went before in any match, and today was not a great day at the office for County.

Similarly the season got off well enough, but surely we must reflect on the wisdom of changing manager`s with County well placed with games in hand on those then above them in the league at the time- a position that ( no fault of the new manager) we then lost in the immediate transition period .

Should we have loaned Bennett to Hartlepool? You know the answer to that, and we have reaped that particular whirl wind unfortunately today.

See you all next season!